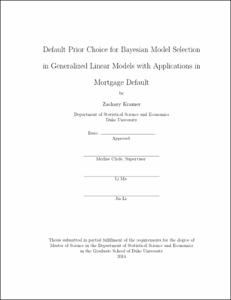 The adoption of Zellner's g prior is a popular prior choice in Bayesian Model Averaging, although literature has shown that using a fixed g has undesirable properties. Mixtures of g priors have recently been proposed for Generalized linear models, extending results from the Gaussian linear model context. This paper will specifically look at the model selection problem as it applies to logistic regression. The effect of prior choice on both model selection and prediction using Bayesian Model Averaging is analyzed. This is done by testing a variety of model space and mixtures of g priors in a simulated data study as well illustrating their use in mortgage default data. This paper shows that the different mixtures of g priors tends to fall into one of two groups that have similar behavior. Additionally, priors in one of these groups, specifically the n/2, Beta Prime, and Robust mixtures of g priors, tend to outperform the other choices.