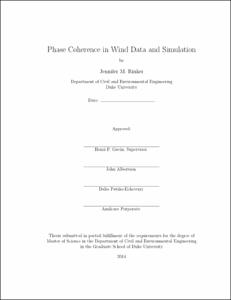 Novel wind turbine designs are deemed acceptable through a simulation-based certification process that involves generating a synthetic wind record and using it as an input to a computer model of the turbine. Naturally, whether the simulation loads reflect the loads that the turbine would actually experience depends on the accuracy of the wind turbine model and, more importantly, on the accuracy of the method used to generate the synthetic wind record. The simulation methods that are commonly used for this purpose are spectral-based and produce Gaussian, stationary random fields. These methods prescribe a power spectral density (PSD) of the wind velocity, which fixes the magnitudes of the Fourier components, then assumes that the Fourier phase angles are independent and uniformly distributed. An inverse Fast Fourier Transform (IFFT) is then used to transform the wind velocity field to the time domain.

This thesis applies the concept of phase coherence---i.e., Fourier phase angles that are not independent---to the stochastic modeling and simulation of wind velocity fields. Using a large dataset available from the National Wind Technology Center (NWTC), a joint distribution is characterized for the mean wind speed <italic>U</italic>, turbulence &sigma;u, Kaimal length scale <italic>L</italic>, and a metric for the degree of phase coherence in wind data, <italic>R</italic>. The correlations between these four parameters, the vertical height, and another phase coherence parameter are presented; only <italic>U</italic>, &sigma;u, and <italic>L</italic> have any significant degree of correlation. The joint distribution is used to generate synthetic wind records, which are then compared with measured data that have the same parameter values. For data with low to medium coherence values, the synthetic records have a similar qualitative appearance to the data. For high levels of phase coherence, the records simulated with the proposed model were qualitatively different from records with the same parameter values due to the variation of the phase difference spread in the spectral domain. Lastly, the importance of correctly modeling phase coherence is demonstrated by using the data and the synthetic records as inputs to a single-degree-of-freedom (SDOF) oscillator and comparing the peak response statistics and damage equivalent loads (DELs).