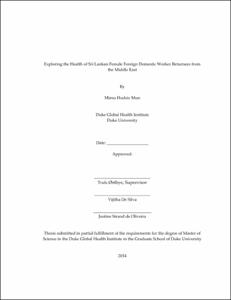 Over the past few decades, Sri Lanka has experienced a feminization of migrant labor whereby increasing numbers of women have gone abroad to seek employment as foreign domestic workers. Despite the dominance of this profession among the female migrant labor force, little is known about their occupational health and, thus, little care has been devoted to meeting the health needs of this population. This study aimed to contribute to the current gap in knowledge and bring greater attention to the issue primarily through qualitative inquiry. More specifically, the objectives pursued were to obtain information regarding the health problems that Sri Lankan female foreign domestic workers face, understand how foreign domestic work may have caused those problems, and identify what these women consider to be the more common and more concerning health problems and their causes.

Twenty-five Sri Lankan female foreign domestic workers from Galle District, who were formerly employed in the Middle East, participated in focus group discussions, comprised of six to seven women in each session. During each focus group discussion, the women also engaged in free listing and pile sorting tasks, so as to obtain quantifiable data regarding common and concerning health conditions among female foreign domestic workers. Subsequently, eight participants were invited for in-depth interviews, so as to gain more personal information regarding their individual health.

Through qualitative and quantitative analysis, the study found that not all former female foreign domestic workers suffered from health problems. Of those that did, problems with their physical and mental health were most prevalent. While some experienced only a single concern, others had multiple issues. A number of health conditions perceived to be more common among foreign domestic workers were not thought to be of great concern and vice versa. Furthermore, in reporting what they perceived to be causes of their ill health, the women revealed certain health beliefs. In terms of overall employment, the majority of participants had negative experiences, suffering from overwork and poor treatment as employees. Not all women, however, had the same unpleasant experiences.

Taken together, these findings prompt the need for the Sri Lankan government and the Sri Lanka Bureau of Foreign Employment to do more in terms of prevention and improving the working conditions of Sri Lankan women working as foreign domestic workers. Moreover, the findings can inform the reformation of pre-departure training, legal frameworks, and post-migration assistance to meet the needs of foreign domestic workers, particularly in terms of protecting their rights and health. Future studies may be qualitative so as to further explore foreign domestic workers' health beliefs or cross-cultural and utilizing mixed-methods. Finally, the results of this study will be used to develop a health questionnaire to be administered to this population in a future quantitative study, so as to obtain more generalizeable data in regard to prevalence of certain health problems.