Do Citizens in Authoritarian Countries Censor Themselves? 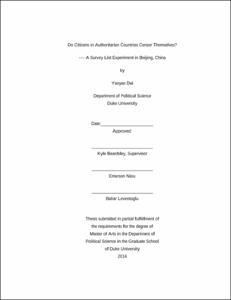 Citizens' opinions in authoritarian countries are overlooked in the current research on authoritarian regimes. It is also hard to get the true opinions from the citizens. Because they might fear the consequences of disclosure and they might be unwilling to report socially undesired opinions. Researchers question the survey conducted in authoritarian countries, and worry about the possible "self-censorship" in those countries. In this paper, I applied a survey technique named list experiment to answer whether citizens in authoritarian countries censor their opinions towards sensitive questions, what kind of issue could be more sensitive and what kind of people tend to self-censor more. Based on my experiment in the capital of China, people do censor themselves, especially in political fundamental issue. People are more willing to tell true opinion towards economic issue. Among different subgroups, old people, probationary CCP members and government employees tend to censor themselves more.