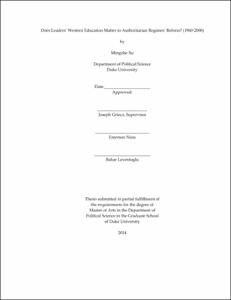 Journalists and policy makers give the impression that western education is a good, cheap way to spread democracy and spur development. The US government spends $243 million a year to help subsidize foreign students. Conventional wisdom also implies that education enables a culture of democracy and common identity. However, scientifically, are authoritarian leaders being educated in western classes more likely to promote democratization and economic development? With this question, I collected data of authoritarian leaders' educational background from 1960 to 2000 with three categories: western education, local education and military education, in an effort to examine the rightfulness of the previous arguments. Based on this original dataset, two models are built in this paper regarding the influences of western education on democratization and economic development which are featured by the change of polity score and GDP growth rate respectively. Unlike previous researches and arguments, I find no correlations between authoritarian leaders' western education and the promotion of reforms in the corresponding countries. The author argues that authoritarian leaders being educated in western countries are at almost at the same level with their counterparts in promoting democratization and developing economy.