Taming Amour-Propre: A Study of Book IV of Rousseau's Emile 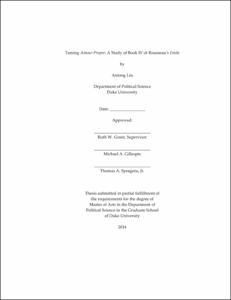 Amour-propre is a crucial concept of Rousseau's philosophy. Although recent studies have confirmed its moral ambiguity, they paid insufficient attention to Rousseau's account of amour-propre in his Emile and thus failed to appreciate the method Rousseau proposes therein to tame Emile's amour-propre. By close textual examinations of Emile, especially of the first part of its Book IV, this paper analyzes the moral ambiguity of amour-propre and Rousseau's remedy for its almost inevitable inflammation. Rather than eliminating amour-propre, the education of Emile aims at preventing his innocuous amour-propre from being inflamed. This at first requires that a cosmopolitan type of friendship be cultivated in Emile's heart so as to further cultivate his pity. Yet since the origin of the problem of inflamed amour-propre is the relativity intrinsic to human society and comparisons, pity, which is equally relative/inter-subjective, may suffer from the same problem of amour-propre. Therefore, Rousseau bases his remedial project upon the indestructible "true relations of man" (i.e. natural equality of man) that is objective (or non-relational) and guides Emile's affections towards these relations so as to make it possible for Emile to know all human relations and comparisons without taking any of them seriously.