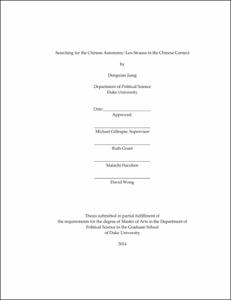 Focusing on the current "Strauss fever" in contemporary China, this thesis addresses two issues: Why Leo Strauss is popular in China, and how Chinese Straussians interpret and apply Leo Strauss's thought in the Chinese context. I argue that, Chinese Straussians are creatively accepting Leo Strauss's thoughts: Strauss's revival of the ancient Western political philosophy reminds Chinese Straussians to turn their eyes toward ancient Chinese thought. By reemphasizing the value of traditional Chinese wisdom, Chinese Straussians find that they have gained a perspective from which to reevaluate the justification of modernity and all relative Enlightenment and postmodern "isms." According to them, returning to the Chinese philosophical tradition will liberate China from the dominance of modern and contemporary Western thought and reestablish the autonomy of Chinese civilization.