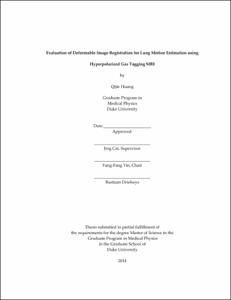 Method: Three healthy subjects were imaged using the HP MR tagging, as well as a high-resolution 3D proton MR sequence (TrueFISP) at the end-of-inhalation (EOI) and the end-of-exhalation (EOE). Ground truth of lung motion and corresponding displacement vector field (tDVF) was derived from HP tagging MRI by manually tracking the displacement of tagging grids between EOI and EOE. Seven different DIR methods were applied to the high-resolution TrueFISP MR images (EOI and EOE) to generate the DIR-based DVFs (dDVF). The DIR methods include Velocity (VEL), MIM, Mirada, multi-grid B-spline from Elastix (MGB) and 3 other algorithms from DIRART toolbox (Double Force Demons (DFD), Improved Lucas-Kanade (ILK), and Iterative Optical Flow (IOF)). All registrations were performed by independent experts. Target registration error (TRE) was calculated as tDVF - dDVF. Analysis was performed for the entire lungs, and separately for the upper and lower lungs.

Results: Significant differences between tDVF and dDVF were observed. Besides the DFD and IOF algorithms, all other dDVFs showed similarity in deformation magnitude distribution but away from the ground truth. The average TRE for entire lung ranged 2.5-23.7mm (mean=8.8mm), depending on the DIR method and subject's breathing amplitude. Larger TRE (13.3-23.7mm) was found in subject with larger breathing amplitude of 45.6mm. TRE was greater in lower lung (2.5-33.9 mm, mean=12.4mm) than that in upper lung (2.5-11.9 mm, mean=5.8mm).