A Dosimetric Characterization of Novel Formulations of Presage 3D Dosimeters 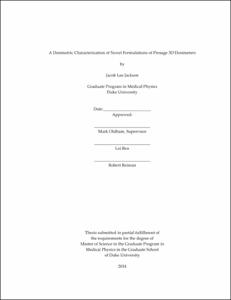 <bold>Purpose:</bold> The purpose of this work is to characterize three novel formulations of a radiochromic material Presage and identify optimal imaging procedures for accurate 3D dosimetry. The dosimetric qualities of interest were studied for each formulation of Presage dosimeter in the context of accurate 3D dosimetry. The formulation of Presage showing the most promise is compared to a clinical 3D quality assurance device to investigate the accuracy of a complex state-of-the-art brain IMRT treatment.

<bold>Methods and Materials:</bold> Three novel formulations of Presage were studied for their temporal stability, sensitivity, linearity of dose response, and feasibility of absolute dose calibration in large volume dosimeters (1 kg) with small volume cuvettes (4g). Large cylindrical dosimeters with 11 cm diameter and 10 cm height were irradiated with 5 2x2 cm fields on the upper flat surface with 3 distinct dose levels (3, 6 and 9.5 Gy, representing low, medium and high). This irradiation pattern is used to determine the dosimetric characteristics mentioned above and was chosen because of its repeatability and it lends to simple measurements of linearity and sensitivity. Measurements were taken at various time points from 0 hours to 24 hours post-irradiation using the high resolution (6.45 m pixels) Duke Medium-Sized Optical-CT Scanner (DMOS) and reconstructed with a Matlab-based reconstruction GUI created in-house. Analysis of the pertinent dosimetric characteristics was performed in the GUI. A comprehensive end-to-end QA test was performed on the optimal formulation using optimal scan timing determined from the formulation studies described above. A 5-field IMRT plan was created for head treatment. The plan was delivered both to a head phantom containing a Presage insert, and to the Delta<super>4</super> QA device. Comparison of both delivered distributions together with the Eclipse predicted dose distribution enabled investigation of the accuracy of the delivery, and the consistency of independent measurement devices.

<bold>Results:</bold> The DEA-1 formulation showed up to 10% variation from 0-2 hours post-irradiation, but showed excellent temporal stability (<2% variation) between 3-7 hours post irradiation, and maintained good stability until 24 hours post-irradiation (up to 3% variation). The DEA-2 also showed up to 10% variation from 0-2 hours post-irradiation. The DEA-2 formulation then showed good stability (up to 2.1% variation) from 3-7 hours, but optical density values dropped by up to 11% after 24 hours. The DX formulation did not maintain stability of optical density for any significant time with values decreasing by ~20% by the 24-hour time point and optical density decreasing at different rates for different dose levels. Linearity of dose response was good for all formulations with an R2 value > 0.99. Gamma analysis with criteria of 3%/2mm was performed on two irradiations of the 5-field pattern on DEA-1 formulation. Voxel passing rates were 96.68% and 97.96%. Comparison of the DEA-1 formulation large dosimeter was done with small volume cuvettes of the same formulation and batch. Sensitivity of the large dosimeter was less than half the sensitivity of the cuvettes. For clinical 3D QA comparison, the DEA-1 formulation was used because it had optimal performance showed the most promise for accurate 3D dosimetry. Line dose profiles showed that Presage compared very well with the Eclipse calculation and had a much better 3D gamma passing rate for 3%/3mm criteria than the Delta<super>4</super> (>99% vs 75%).

<bold>Conclusions:</bold> The DEA-1 formulation shows the most promise because of its temporal stability and linearity of dose response. The optimal imaging window for this formulation was determined to be 3-24 hours post-irradiation. The DEA-2 and DX formulation also showed potential for accurate dosimetry. The optimal imaging window for the DEA-2 formulation was determined to be 2-6 hours post-irradiation. The optimal scan time for the DX formulation was determined to be immediately post-irradiation. The amount of accuracy loss depending on the scan time is dependent on the formulation and when the dosimeter is scanned. Line dose profiles and gamma analysis results from the comparison of Presage and Eclipse calculation provide strong validation of the accuracy of the IMRT treatment delivery. Comparison of Presage to the Delta<super>4</super> show the Delta<super>4</super> to be somewhat lacking in its ability to calculate 3D dose in the phantom/Presage geometry.