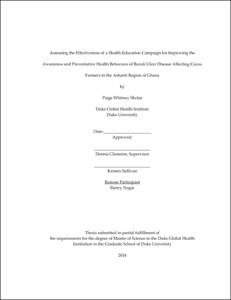 Buruli ulcer disease (BU) is a necrotizing disease primarily affecting the skin, subcutaneous tissue, and bone. The disease, caused by Mycobacterium ulcerans, is the third most prevalent mycobacterial disease after tuberculosis and leprosy [1]. Although BU has been reported in regions throughout the world including Latin America, Western Pacific, Central Africa, and Asia, it disproportionately affects western Africa [2]. Among the western Africa countries, Ghana has reported the highest number of active cases [3]. Although the mode of transmission of Buruli ulcer disease is unknown, its prevalence is highly associated with stagnant water [4]. Therefore, rural areas where farming is a primary lifestyle are typically endemic areas.

In August 2012, Family Health International 360 (FHI360) and The Hershey's Company implemented The Buruli Ulcer Awareness, Prevention, and Treatment Project in the Ashanti Region of Ghana. The goal of this health education campaign was to improve farmers' knowledge, and attitudes of BU prevention and treatment methods

In order to assess this campaign, interview-assisted surveys and focus group discussions were conducted within three districts where the campaign was implemented and two control districts. A structured questionnaire was used to collect data at the household level. A total of 340 participants was surveyed within five districts. Semi-structured focus group discussions were conducted in two intervention districts and two control districts to assess the health education campaign.

All transcripts from the focus group discussion were entered and coded in NVivo. One member of the research team coded each discussion into the pre-determined themes: knowledge of pathology of BU, and knowledge of treatment and preventative behaviors. These themes were compared between each district to identify differences between the districts that were exposed to the health education campaign and the districts that were not exposed.

The quantitative data showed that there was no difference between the intervention and control districts in the participants' knowledge of the causes, signs and symptoms, available treatments, and preventative behavior of Buruli ulcer disease. The intervention districts showed significantly less negative attitudes toward Buruli ulcer victims when compared to those participants within the control districts. Generally, knowledge of pathology, treatment, and preventative behaviors were high in all districts regardless of the presence of the intervention.

Overall, the focus group discussion participants primarily demonstrated a clear understanding of correct BU knowledge of pathology, available treatments, and preventative behavior in all districts. In all FGDs, water and filth were mentioned as causes of BU prevalence. The FGDs expanded on participants' awareness of available treatments to include cost of treatment and travel to care as barriers to accessing said treatments.

The health education campaign had no impact on the general knowledge of Buruli ulcer disease. Due to the endemicity of all the districts, it is not surprising that all the participants properly identified the causes, signs and symptoms, available treatment, and preventative behaviors of BU. The participants in the intervention districts reported significantly less negative attitudes toward BU victims comparatively to the participants in the control districts. The districts where the health education campaign was implemented expressed less negative attitudes toward Buruli ulcer victims when compared to the control districts. Our data supports that follow-up health education campaigns should focus on creating neutral or positive attitudes toward BU victims.