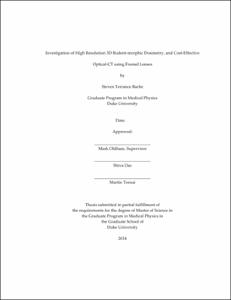 Micro-irradiators enable exploration of the efficacy of novel radiation treatment approaches by providing the capability to reproduce realistic treatment delivery in small animal models. An approach of current topical interest is hypofractionated stereotactic body radiation therapy (SBRT), and the study of associated tumor and normal tissue radio-biology. Rodent SBRT is extremely challenging, requiring the precise delivery of radiation beams on the order of several millimeters. At present there are no methods to comprehensively verify these delivery techniques due to the requirements for ultra-high resolution and ability to measure the dose in 3 dimensions (3D).

This work introduces a potential solution to the rodent SBRT verification challenge: radiochromic rodent-morphic 3D dosimeters compatible with ultra-high resolution optical computed tomography (optical-CT) dose read-out. Rodent-morphic dosimeters were produced by 3D-printing molds of rodent anatomy directly from X-ray CT data, and using these molds to create tissue-equivalent phantoms both with and without high-Z spinal inserts for cone-beam CT targeting. Feasibility was evaluated through a series of irradiations, including a 180-degree spinal arc treatment. Dose distributions were measured in high-resolution (0.5mm isotropic voxels) with an in-house built optical-CT system, which determined dose from the change in optical density throughout the dosimeters from pre-and post-irradiation scans. Optical-CT data was calibrated to absolute dose using a calibration curve determined from irradiating small volumes of radiochromic material from the same batch as the rodent-morphic dosimeters to known doses in a 6MV beam (negligible energy response was assumed). Independent verification of absolute dose at a point was made with a novel scintillator comprised of europium and lithium doped yttrium oxide nanocrystals, with a sub-mm active length. Independent verification of the dose distribution was performed using EBT2 radiochromic film positioned in the dosimeters, which had been sliced in half. Contrast-to-noise ratio between high-Z spinal inserts and tissue-equivalent PRESAGE material was found to be ~10, sufficient for bony alignment and isocenter targeting with on-board CBCT image guidance. Absolute dose calculated at isocenter through optical-CT was found to agree with nano-detector measurement within 3%, while relative dose distributions in two orthogonal planes were found to agree with film within 4%. PRESAGE rodent-morphic dosimeters demonstrated much promise in the verification of precise radiation treatment given by the X-Rad 225Cx micro-irradiator.

Practical challenges involved in optical-CT imaging were addressed through the investigation of an in-house Fresnel-based optical-CT system with considerably less refractive index-matching fluid. The "DFOS" (Duke Fresnel-based Optical-CT System) system differed from current optical-CT systems by replacing cumbersome convex telecentric lenses with a lighter and much less expensive Fresnel system. A second major modification was the replacement of the refractive index-matching fluid bath with a solid polyurethane tank. PRESAGE radiochromic dosimeters were irradiated with orthogonal parallel-opposed treatments and a brain IMRT treatment and dose distributions were readout by the DFOS system and compared to both treatment planning software prediction and other in-house optical-CT systems. Gamma index passing rate at the 3%/3mm threshold for the two parallel-opposed and brain IMRT treatments were 89.3%, 92.1%, and 87.5%, respectively. The DFOS system showed promise for 3D dosimetry, but the performance is still substantially inferior at present to the gold-standard systems.