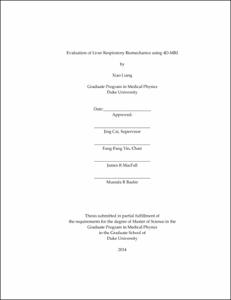 <bold>Purpose:</bold> It is of clinical interest to study liver deformation during breathing by applying deformable image registration (DIR) on respiratory correlated four-dimensional (4D) images. This study aims to evaluate and compare the accuracy of DIR-derived liver deformation based on 4D computed tomography (CT) and 4D magnetic resonance imaging (MRI).

<bold>Methods:</bold> 4D CT, 4D MRI and cine magnetic resonance (MR) images of liver region were acquired from 5 patients with liver cancer under an IRB-approved protocol. ROIs containing tumors in each patient were tracked multiple times (3~5) in cine MR images. The trajectories from tracking, covering several breathing cycles, were converted to trajectories in one breathing cycle through phase sorting. The average phase sorted trajectories for each patient were used as reference trajectories after manual verification. Deformation vector fields (DVFs) from 4D CT and 4D MRI were generated via DIR implemented in Velocity AI. To enable comparison between DVFs and reference tumor trajectories, deformation vectors from each frame were linked together, forming DVF-based trajectories at each voxel. All DVF-based trajectories within each ROI were averaged to represent tumor motion. The single-phase difference, the trajectory difference and the correlation coefficient between each pair of DVF-based trajectory and reference trajectory were calculated. Wilcoxon signed-rank tests were conducted to determine whether there was significant difference between the single-phase differences, the trajectory differences and the correlation coefficients for 4D CT and 4D MRI.