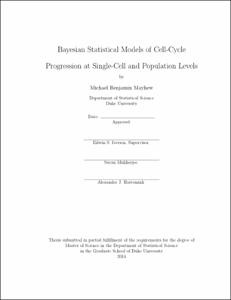 Cell division is a biological process fundamental to all life. One aspect of the process that is still under investigation is whether or not cells in a lineage are correlated in their cell-cycle progression. Data on cell-cycle progression is typically acquired either in lineages of single cells or in synchronized cell populations, and each source of data offers complementary information on cell division. To formally assess dependence in cell-cycle progression, I develop a hierarchical statistical model of single-cell measurements and extend a previously proposed model of population cell division in the budding yeast, <italic>Saccharomyces cerevisiae</italic>. Both models capture correlation and cell-to-cell heterogeneity in cell-cycle progression, and parameter inference is carried out in a fully Bayesian manner. The single-cell model is fit to three published time-lapse microscopy datasets and the population-based model is fit to simulated data for which the true model is known. Based on posterior inferences and formal model comparisons, the single-cell analysis demonstrates that budding yeast mother and daughter cells do not appear to correlate in their cell-cycle progression in two of the three experimental settings. In contrast, mother cells grown in a less preferred sugar source, glycerol/ethanol, did correlate in their rate of cell division in two successive cell cycles. Population model fitting to simulated data suggested that, under typical synchrony experimental conditions, population-based measurements of the cell-cycle were not informative for correlation in cell-cycle progression or heterogeneity in daughter-specific G1 phase progression.