Theory of Representation: China and the West 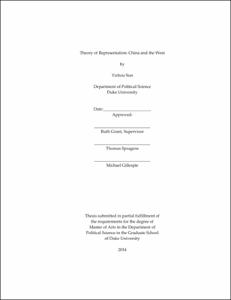 This thesis tries to explore the nature of Chinese Communists' claim to represent the people. Although China has never established a Western-style representative government based on elections, it has its own theory of representation. By comparing the Chinese theory with the theories about representation of Western thinkers such as the Liberals, Burke, and Rousseau, it can be found that although China's theory is different from the Liberal views, it has illuminating similarities with Burke's and Rousseau's theories. On the other hand, it contains distinctive characters, including the role of vanguard, and masses campaigns as means of representation.