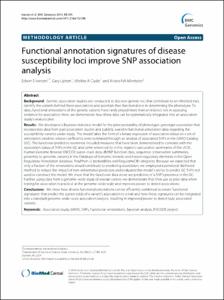 View / Download
815.4 Kb
Date
Authors
Iversen, ES
Lipton, G
Clyde, MA
Monteiro, ANA
Repository Usage Stats
239
views
169
downloads
Abstract
BACKGROUND: Genetic association studies are conducted to discover genetic loci that contribute to an inherited trait, identify the variants behind these associations and ascertain their functional role in determining the phenotype. To date, functional annotations of the genetic variants have rarely played more than an indirect role in assessing evidence for association. Here, we demonstrate how these data can be systematically integrated into an association study's analysis plan. RESULTS: We developed a Bayesian statistical model for the prior probability of phenotype-genotype association that incorporates data from past association studies and publicly available functional annotation data regarding the susceptibility variants under study. The model takes the form of a binary regression of association status on a set of annotation variables whose coefficients were estimated through an analysis of associated SNPs in the GWAS Catalog (GC). The functional predictors examined included measures that have been demonstrated to correlate with the association status of SNPs in the GC and some whose utility in this regard is speculative: summaries of the UCSC Human Genome Browser ENCODE super-track data, dbSNP function class, sequence conservation summaries, proximity to genomic variants in the Database of Genomic Variants and known regulatory elements in the Open Regulatory Annotation database, PolyPhen-2 probabilities and RegulomeDB categories. Because we expected that only a fraction of the annotations would contribute to predicting association, we employed a penalized likelihood method to reduce the impact of non-informative predictors and evaluated the model's ability to predict GC SNPs not used to construct the model. We show that the functional data alone are predictive of a SNP's presence in the GC. Further, using data from a genome-wide study of ovarian cancer, we demonstrate that their use as prior data when testing for association is practical at the genome-wide scale and improves power to detect associations. CONCLUSIONS: We show how diverse functional annotations can be efficiently combined to create 'functional signatures' that predict the a priori odds of a variant's association to a trait and how these signatures can be integrated into a standard genome-wide-scale association analysis, resulting in improved power to detect truly associated variants.
Type
Journal article
Subject
Disease Susceptibility
Female
Genetic Association Studies
Genetic Loci
Genome-Wide Association Study
Humans
Molecular Sequence Annotation
Ovarian Neoplasms
Polymorphism, Single Nucleotide
Permalink
https://hdl.handle.net/10161/8882
Published Version (Please cite this version)
10.1186/1471-2164-15-398
Publication Info
Iversen, ES; Lipton, G; Clyde, MA; & Monteiro, ANA (2014). Functional annotation signatures of disease susceptibility loci improve SNP association analysis. BMC Genomics, 15. pp. 398. 10.1186/1471-2164-15-398. Retrieved from https://hdl.handle.net/10161/8882.
This is constructed from limited available data and may be imprecise. To cite this article, please review & use the official citation provided by the journal.
Collections
More Info
Show full item record