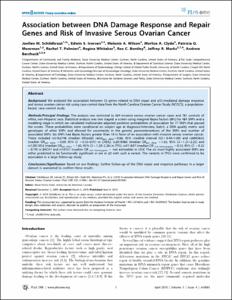 James M. Ingram Distinguished Professor of Gynecologic Oncology
Dr. Andrew Berchuck is Director of the Duke Division of Gynecologic Oncology and holds the James M. Ingram Distinguished Professorship. He is a practicing oncologist who is actively involved in the surgical and chemotherapy management of women with ovarian, endometrial and lower genital tract cancers. This includes minimally invasive laparoscopic surgical approaches. He also has developed a research program that focuses on the molecular-genetic alterations involved in malignant transformation of Professor in Surgery
I have been engaged in basic and applied cancer research for over 28 years beginning with my post-doctoral fellowship under Arnold Levine at Princeton. Since being appointed to the faculty in the Department of Surgery at Duke, my primary interest has been towards understanding breast and ovarian cancer. I am a charter member of the NCI-Early Detection Research Network (EDRN) and have been an integral scientist in the breast and gynecologic collaborative group for 15 years including leading th Professor Emeritus in Family Medicine and Community Health
Dr. Moorman's research focuses on the epidemiology of women's health issues. Her work includes research on ovarian cancer, breast cancer and hysterectomy. Areas of particular interest include disparities in cancer risk factors and outcomes and the effects of hysterectomy on ovarian function.  As part of the Duke Evidence Synthesis group, she has also been involved in systematic reviews and meta-analyses related to ovarian cancer, breast cancer and infertility. Professor Emeritus in Family Medicine and Community Health
Dr. Schildkraut is an epidemiologist whose research includes the molecular epidemiology of ovarian, breast and brain cancers. Dr. Schildkraut's research interests include the study of the interaction between genetic and environmental factors. She is currently involved in a large study of genome wide association and ovarian cancer risk and survival. Some of her work is also focused on particular genetic pathways including the DNA repair and apoptosis pathways. She currently leads a study of
More Authors
Alphabetical list of authors with Scholars@Duke profiles.