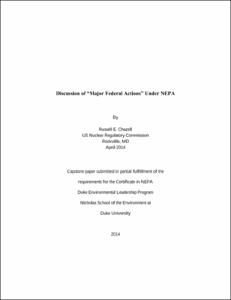 View / Download
433.3 Kb
Date
Author
Chazell, Russell E.
Repository Usage Stats
922
views
6,312
downloads
Abstract
Section 102(2)(C) of the NEPA statute requires that significant effects to the human environment be documented in “a detailed statement by the responsible official” for “major Federal actions”. The statute itself does not plainly define what constitutes a major Federal action other than to say that “recommendation[s] and report[s] on proposals” qualify. This capstone paper will discuss the legislative history, case law, and practical application of NEPA’s “major Federal action” concept as it has been interpreted by the Nuclear Regulatory Commission (NRC) and Federal court litigation. This author is particularly interested in the recent decision by the US Circuit Court of Appeals for the District of Columbia Circuit which vacated the NRC’s 2010 Waste Confidence Rule. One of the bases for vacating the rule was the fact that the Court considered the Waste Confidence Rule a major Federal action under NEPA. The paper will conclude with a discussion of the appropriateness, under NEPA, of deeming a policy decision like the Waste Confidence Rule, a major Federal action when the final Agency action, issuing or renewing a license, relies on a separate and distinct environmental impact statement (EIS).
Type
Report
Subject
NEPA, environment, nuclear, federal action
Permalink
https://hdl.handle.net/10161/8886
Citation
Chazell, Russell E. (2014). Discussion of “Major Federal Actions” Under NEPA. Retrieved from https://hdl.handle.net/10161/8886.
Collections
More Info
Show full item record