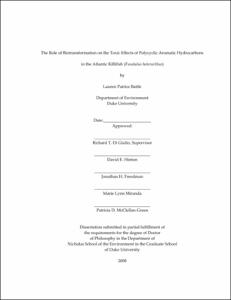 Polycyclic aromatic hydrocarbons (PAHs) are prevalent contaminants in aquatic environments, and exposure can elicit a variety of toxic effects including teratogenicity, genotoxicity and carcinogenicity. Many PAHs are agonists for the aryl hydrocarbon receptor (AHR), which is involved in mediating their teratogenic and carcinogenic effects by unknown mechanisms of action. When activated, the AHR initiates the transcription of a variety of genes involved in both phase I and phase II metabolism, including the monooxygenase cytochrome P4501s (CYP1A, CYP1B1, CYP1C1). The biotransformation of PAHs is necessary for their detoxification and excretion; however, oxidation by CYP1A results in the conversion of the parent PAH to reactive metabolic intermediates that can covalently bind to nucleic acids and proteins, or cause oxidative stress. There is a population of killifish (Fundulus heteroclitus) from a PAH contaminated site on the Elizabeth River (ER) in Portsmouth, Virginia whose embryos, larvae, and adults are refractory to the induction of CYP1A activity, protein or message when exposed to AHR agonists. The embryos and larvae of the ER population are resistant to acute PAH-induced teratogenicity and lethality. However, wild caught ER adults at the site have a high prevalence of hepatic and pancreatic neoplasms, suggesting that their resistance to intermediate and chronic PAH toxicity requires further investigation. The contaminated sediment at the ER is comprised of a complex mixture of PAHs with different mechanisms of action. Although there is limited information concerning PAH mixtures, the current assumption for risk assessors is that their toxicity is additive. In studying the effects of the mixture of PAHs at the Elizabeth River, research has shown that co-exposure of reference site killifish embryos to PAH-type CYP1A inhibitors causes a synergistic increase in the embryotoxicity of PAH-type AHR agonists and PAH-contaminated sediment extract. This dissertation utilized the resistant Elizabeth River killifish, chemical inhibitors, and morpholino technology to determine how the chemical and molecular inhibition of CYP1 enzymes affects the biotransformation of PAHs and ultimately their teratogenicity, genotoxicity, and carcinogenicity. Toward these objectives, the mRNA inductions of the newly sequenced metabolic enzymes, CYP1B1 and CYP1C1, were characterized in embryos born to ER and reference site killifish after exposure to multiple AHR agonists. Embryos from both populations were also co-exposed to the PAHs benzo[a]pyrene (BaP; AHR agonist) and fluoranthene (FL; CYP1A inhibitor). Reference site embryos were injected with an antisense morpholino to knockdown translation of CYP1A and exposed to BaP. After chemical exposure, embryos were examined for CYP1 activity, teratogenesis, and BaP biotransformation. To examine the effects of early-life exposure on the chronic toxicity of PAHs, larval offspring of ER and reference site killifish were exposed to BaP, and examined for CYP1 activity, mitochondrial and nuclear DNA damage, and BaP biotransformation. Three and nine months after exposure, livers of exposed juveniles were analyzed histologically. The mRNA inductions of the metabolic enzymes, CYP1A, CYP1B1, and CYP1C1, were significantly reduced in ER embryos exposed to AHR agonists compared to those from a reference site. CYP1 enzymatic activity was also reduced in these embryos, and they were resistant to the teratogenic effects of PAH both in single and combined exposures. These data suggest that the ER population have adapted an altered responsiveness of the AHR signaling pathway. Higher concentrations of parent BaP were recovered from the embryonic and larval offspring of the ER killifish. Additionally a higher concentration of the metabolite BaP-9,10-dihydriodiol was recovered from ER embryos, suggesting that the adaption alters PAH biotransformation and excretion in this population. ER larvae and juveniles were more resistant to PAH-induced genotoxicity and carcinogenicity compared to the reference site population, indicating that the adaptive resistance of the ER population to PAH-induced teratogenicity has also resulted in a resistance to both genotoxicity and carcinogenicity. Co-exposure of the reference site embryos to the PAH mixture and morpholino knockdown of CYP1A did increase teratogenicity; however, no interpretable alterations in BaP biotransformation were observed. Chemical and molecular alterations of metabolic enzymes can dramatically affect the toxic outcomes of exposure to PAHs. The study of biotransformation is an important step in understanding the mechanisms of PAH-induced toxicity, and evaluating the risks in aquatic ecosystems.