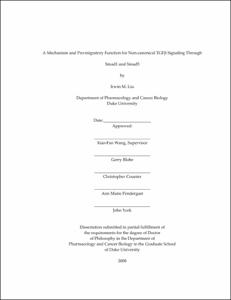 During the course of breast cancer progression, normally dormant tumor-promoting effects of transforming growth factor-beta (TGF-beta) including migration, invasion, and metastasis are unmasked. Although this switch or gain of TGF-beta function has been modeled extensively in in-vivo and in-vitro breast cancer systems, the signaling mechanisms that control this TGF-beta switch are poorly understood. Indeed, the precise role of canonical TGF-beta signaling through the type I TGF-beta receptor, ALK5, and its intracellular effectors, Smad2 and Smad3, is still poorly understood. In an effort to identify mechanisms that regulate the ability of TGF-beta to stimulate mammary epithelial cell migration in-vitro, we found that TGF-beta stimulates the phosphorylation of Smad1 and Smad5, intracellular effectors that are typically associated with bone morphogenetic protein (BMP) signaling. As this phosphorylation response has not been reported extensively, little is known about the prevalance, mechanism, function, or pathological relevance of TGF-beta-stimulated Smad1/5 phosphorylation.

Taken together, our data provides evidence that TGF-beta-stimulated Smad1/5 phosphorylation, which occurs through a non-canonical mechanism that challenges the notion of selective Smad phosphorylation by ALK5, mediates the pro-migratory TGF-beta switch in mammary epithelial cells.