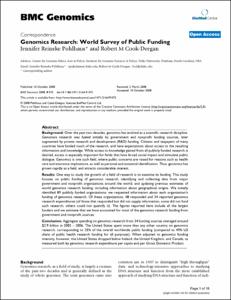 Files
Published version
1.3 Mb
Supporting information
1.3 Mb
Date
Authors
Pohlhaus, Jennifer Reineke
Cook-Deegan, Robert M
Repository Usage Stats
136
views
234
downloads
Abstract
BACKGROUND: Over the past two decades, genomics has evolved as a scientific research discipline. Genomics research was fueled initially by government and nonprofit funding sources, later augmented by private research and development (R&D) funding. Citizens and taxpayers of many countries have funded much of the research, and have expectations about access to the resulting information and knowledge. While access to knowledge gained from all publicly funded research is desired, access is especially important for fields that have broad social impact and stimulate public dialogue. Genomics is one such field, where public concerns are raised for reasons such as health care and insurance implications, as well as personal and ancestral identification. Thus, genomics has grown rapidly as a field, and attracts considerable interest. RESULTS: One way to study the growth of a field of research is to examine its funding. This study focuses on public funding of genomics research, identifying and collecting data from major government and nonprofit organizations around the world, and updating previous estimates of world genomics research funding, including information about geographical origins. We initially identified 89 publicly funded organizations; we requested information about each organization's funding of genomics research. Of these organizations, 48 responded and 34 reported genomics research expenditures (of those that responded but did not supply information, some did not fund such research, others could not quantify it). The figures reported here include all the largest funders and we estimate that we have accounted for most of the genomics research funding from government and nonprofit sources. CONCLUSION: Aggregate spending on genomics research from 34 funding sources averaged around $2.9 billion in 2003-2006. The United States spent more than any other country on genomics research, corresponding to 35% of the overall worldwide public funding (compared to 49% US share of public health research funding for all purposes). When adjusted to genomics funding intensity, however, the United States dropped below Ireland, the United Kingdom, and Canada, as measured both by genomics research expenditure per capita and per Gross Domestic Product.
Type
Journal article
Subject
Canada
Data Collection
Financing, Government
Genetic Research
Genomics
Humans
Ireland
United Kingdom
United States
Permalink
https://hdl.handle.net/10161/8935
Published Version (Please cite this version)
10.1186/1471-2164-9-472
Publication Info
Pohlhaus, Jennifer Reineke; & Cook-Deegan, Robert M (2008). Genomics research: world survey of public funding. BMC Genomics, 9. pp. 472. 10.1186/1471-2164-9-472. Retrieved from https://hdl.handle.net/10161/8935.
This is constructed from limited available data and may be imprecise. To cite this article, please review & use the official citation provided by the journal.
Collections
More Info
Show full item record