Sound, Mediation, and Meaning in Miles Davis's "a Tribute to Jack Johnson" 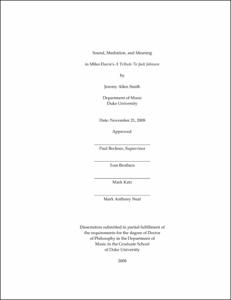 Miles Davis, never one for self-effacing humility, took his boasting to new heights when he proclaimed in a Rolling Stone interview from December 1969, "I could put together the greatest rock and roll band you ever heard." Most critics agree that A Tribute to Jack Johnson, recorded between February and April of 1970, was his attempt to do just that. The album featured an ensemble that was closer to a rock power trio than a jazz quintet, musicians who were as schooled in rock and R&B as in jazz, and a prominent use of emerging instrument and studio technologies previously unheard in Davis's music. In highlighting these stylistic markers, A Tribute to Jack Johnson made definitive the musical transition that Davis's immediately preceding works had set in motion.

Though few fans of the era would have been surprised by Davis's invocation of the value-laden vocabulary of "greatness" in describing his music, many were taken aback by his desire to associate with rock and roll. For a musician trained in the jazz tradition and revered as a master of the genre, the intentional incorporation of influences from popular music was viewed by many jazz listeners as nothing short of heretical. What did it mean, then, for Davis to make such a claim - and such an album - at the particular time that he did?

To address these two questions, I investigate in my dissertation the production, circulation, and reception of both the stand-alone album A Tribute to Jack Johnson and the documentary film for which parts of the album were initially the soundtrack. Combining my training in music with scholarly perspectives on identity politics, technology studies, film studies, and African American social and political history, I demonstrate how this recording comprises both a signal incursion into accepted jazz practice, and a unique window onto vital debates around jazz, popular culture, and identity constructions in the U.S. in the early 1970s. This dissertation thereby offers one approach for continuing the critical re-evaluation of fusion jazz that has prominently been in progress since the late 1990s.