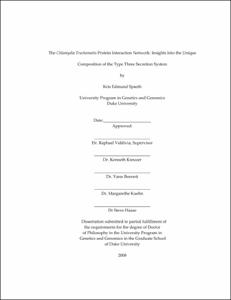 The Gram-negative bacteria Chlamydia trachomatis is a common sexually transmitted pathogen that can cause severe sequelae including cause pelvic inflammatory disease and sterility. This obligate intracellular pathogen effectively manipulates host cellular functions by secreting virulence factors across its membrane bound vacuole. Identifying these virulence components and how they help in establishing an environment conducive for bacterial growth is central to understanding chlamydial pathogenesis. This is experimentally challenging due to a lack of tools to perform molecular genetic studies. In the absence of genetic tools, we developed a yeast model system to identify and characterize chlamydial proteins involved in virulence mechanisms. In this study we describe the identification of twenty-eight proteins potentially involved in modulating host cellular functions and the secretion of virulence factors into the host. Since the delivery of virulence proteins by a type three secretion (T3S) system is a critical step for Chlamydia, we identified the proteins that interacted with the T3S apparatus by yeast two-hybrid analysis. We discovered several novel interactions between and determined that the C. trachomatis T3S apparatus displayed a similar architecture to that of other T3S systems. Furthermore with these approaches we identified networks of proteins that interacted with the secretion apparatus including a novel secretion chaperone protein. We characterized Ct260/Mcsc one of the putative secretion and demonstrated that it represents a novel class 1B secretion chaperone protein. Unlike other known chaperones, Mcsc directly interact with a conserved component of the T3S apparatus cytoplasmic domain, CdsQ. These finding represents a novel mechanism by which the secretion chaperone protein Ct260 may increase the secretion efficiency of its effector cargo and may reveal new facets of secretory cargo recognition by T3S systems.