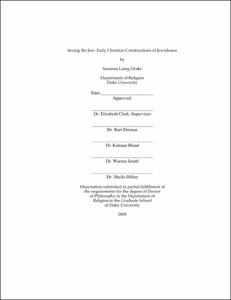 My dissertation analyzes early Christian representations of Jewish sexuality and explores how early Christian writers attacked opponents by depicting them as subjects of perverse or excessive sexual desires. Beginning with the New Testament, I examine how Paul employed sexual stereotypes to distinguish the community of believers in Christ from the wider Gentile world. In the decades after Paul, Greek writers such as Justin Martyr and the author of the Epistle of Barnabas turned accusations of sexual licentiousness and literalist interpretive practices against the Jews. Origen of Alexandria, moreover, utilized accusations of carnality, fleshliness, and sexual licentiousness to produce Jewish-Christian difference; he drew on dichotomies of "flesh" and "spirit" in Paul's letters to support his argument for the superiority of Christian "spiritual" exegesis over Jewish "carnal" exegesis. Examining the writings of major Christian writers such as Origen and John Chrysostom, I argue that Christian sexual slander against Jews intensified as Christian exegetes endeavored to claim Jewish scripture for Christian use in the third and fourth centuries. My research examines these literary constructions of Jewish sexuality in early Christian writings of Greek Fathers and illuminates how these constructions function in relation to the development of Christian biblical hermeneutics, the formation of Christian practices of self-mastery, and the expansion of Christian imperial power. By exploring how early Christian writers appealed to categories of gender and sexuality to produce Jewish-Christian difference, I aim to contribute to recent scholarship on the variety of strategies by which early Christians negotiated identity and defined Otherness.