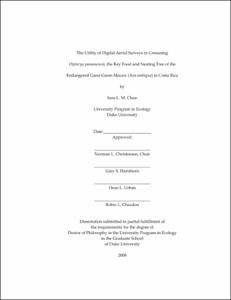 Remote sensing technologies offer an innovative way to study tropical forests and complement research from forest inventory plots. From a logistic standpoint, remote sensing mitigates some of the physical, political, and economic challenges that complicate terrestrial studies of tropical forests. From a biological standpoint, remotely sensed data can elucidate ecological phenomena and dynamics of tropical forests that may be challenging to observe on the ground. I conducted a digital aerial survey during the peak blooming period for Dipteryx panamensis. D. panamensis is a canopy emergent, keystone tree species within the lowland Atlantic forests of Costa Rica. The aerial survey occurred over Maquenque National Wildlife Refuge, which is situated in the proposed San Juan-La Selva Biological Corridor. Maquenque was decreed in 2005 to protect the last breeding habitat for the endangered Great Green Macaw (Ara ambigua) in Costa Rica. The Great Green Macaw depends on D. panamensis as its primary food and nesting resource. However, because of Costa Rica's complex deforestation history, the Great Green Macaw remains imperiled due to habitat fragmentation, degradation, and loss. Only 25 to 35 breeding pairs and 250 individuals likely persist in the country. My research had three main objectives. First, I evaluated a classification technique that capitalized on the unique spectral signature of blooming D. panamensis in order to detect this species using a pattern recognition approach. Second, I determined the landscape density and distribution of this tree species using results from the aerial survey and classification. I also noted environmental factors predicting potential D. panamensis habitat using a classification and regression tree (CART) model, and I subsequently calculated how much potential habitat exists in Costa Rica. Third, I identified environmental conditions that indicate potential breeding habitat for the Great Green Macaw using a CART model, and I calculated how much potential breeding habitat exists in Costa Rica. Results of the classification work indicate that D. panamensis can be identified based on its unique spectral signature. In particular, the IHS (intensity, hue, saturation) color space was effective at resolving this tree. Results of the density analysis suggest that canopy emergent D. panamensis trees occur at densities as high as 2 trees/hectare. This work demonstrates that D. panamensis exists in denser patches than previously determined from forest inventory plots. Environmental conditions that will support high densities of D. panamensis habitat occur between 45 and 125 meters in elevation and on soil with an acid and clay profile. Nearly 240,000 hectares could support high density patches of D. panamensis in Costa Rica. Potential Great Green Macaw breeding habitat is defined by the density of D. panamensis trees within its 550-hectare breeding territory. Approximately 67,000 hectares of Great Green Macaw breeding territory exist in Costa Rica. Ultimately, the conservation of both D. panamensis and the Great Green Macaw in Costa Rica may require a multinational partnership between Costa Rica and Nicaragua.