Out of the Laager, Into the Streets: The Origins, Rise, and Fall of Gay Reform Organizing in Apartheid South Africa 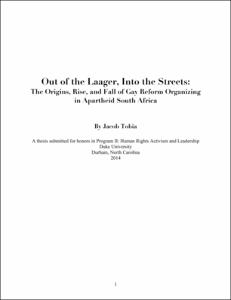 View / Download
14.2 Mb
Date
Author
Tobia, Jacob
Repository Usage Stats
906
views
1,249
downloads
Abstract
This paper chronicles the history of South Africa's gay reform movement from the beginning of apartheid in the 1950s through the fall of apartheid in the late 1980s. The gay reform movement spanned from 1968 to 1987, centered on a single-issue Western understanding of gay and lesbian identity, and focused on working with the apartheid state to gain respect and rights for gay and lesbian people within its existing structures. The story of the gay reform movement began in the 1950s and 1960s, when white gay communities predicated on a Western model of gay identity began to form in the major urban centers of Johannesburg, Cape Town, and Durban. It continued through 1968, when white gay men and women formed the first coherent—albeit clandestine—gay political movement aimed at combatting state persecution of homosexual acts. It revived in the early 1980s when white gays and lesbians formed the Gay Association of South Africa and undertook a host of community-building and reform-oriented political activities. And it ended in 1987, when the white organizers of the Gay Association of South Africa finally realized that, given South Africa’s political and racial differences, a reformist struggle for gay rights could never succeed.
Description
This paper is a Program II Honors Thesis submitted for Distinction in Program II and under the advisement of Professor Karin Shapiro. This paper was also the 2014 winner of the Duke University Oliver W. Koonz Human Rights Prize. Funding for field research was provided by the Dean's Summer Research Grant and the Center for Documentary Studies' John Hope Franklin Documentary Award.
Type
Honors thesis
Department
Program II
Subject
LGBT Rights
Gay Rights
Social Movement History
African Studies
Human Sexuality
South Africa, Apartheid
Permalink
https://hdl.handle.net/10161/9023
Citation
Tobia, Jacob (2014). Out of the Laager, Into the Streets: The Origins, Rise, and Fall of Gay Reform Organizing in Apartheid South Africa. Honors thesis, Duke University. Retrieved from https://hdl.handle.net/10161/9023.
Collections
More Info
Show full item record