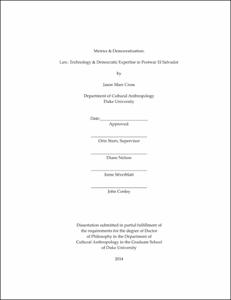 The dissertation is an ethnographic study of the role of monitoring standards on democratic governance reform in El Salvador since the 1992 end of a 12-year civil war. The study looks at the development and implementation of monitoring and evaluation models for rule of law, citizen participation and accountability reforms, in order to understand the impact of standards on the local adaptation and global circulation of democratic reform programs. Through practices of standardization, law and technology together construct the expertise that democratic institutions increasingly require for political participation. The legacy of democratic reform in El Salvador is particularly important because the country served as a laboratory and poster-child for democratization models most recently applied to U.S. efforts in Iraq and Afghanistan.

In-depth qualitative study of the development and use of monitoring standards reveals a formalization of ways of producing and contesting knowledge deemed crucial for political communities - be they rural hamlets or national economic sectors. As with any institutional form, certain political possibilities are enabled while others are marginalized or constrained. However, beside the establishment of dominant frameworks for knowing about social realities and participating in decision-making governing those realities, monitoring standards provide means for the mobilization and advocacy of alternative perspectives and agendas. The dissertation presents a historical account of the institutionalization of monitoring standards that have become typical components of what international agencies promote as democratic governance. Ethnographic accounts of how these standards circulate and are used by governments, NGOs, citizens and social movements illustrate their ubiquity, flexibility and dynamism - from municipal finance and state decentralization, to human rights struggles over water privatization, mining, crime and pharmaceuticals. Research conducted before, during and after the 2009 election of the leftist FMLN party to the presidency captures shifts in the use of monitoring standards as social movement activists move into government.