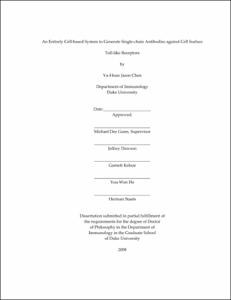 View / Download
6.7 Mb
Date
Author
Chen, Yu-Hsun Jason
Advisors
Gunn, Michael Dee
Dawson, Jeffrey
Kelsoe, Garnett
He, You-Wen
Staats, Herman
Repository Usage Stats
347
views
639
downloads
Abstract
The generation of recombinant antibodies (Abs) using phage display is a proven method to obtain a large variety of Abs that bind with high affinity to a given antigen (Ag). Traditionally, the generation of single chain Abs depends on the use of recombinant proteins in several stages of the procedure. This can be a problem, especially in the case of cell surface receptors, because Abs generated and selected against recombinant proteins may not bind the same protein expressed on a cell surface in its native form and because the expression of some receptors as recombinant proteins is problematic. To overcome these difficulties, we developed a strategy to generate single chain Abs that does not require the use of purified protein at any stage of the procedure. In this strategy, stably transfected cells are used for the immunization of mice, measuring Ab responses to immunization, panning the phage library, high throughputs creening of arrayed phage clones, and characterization of recombinant single chain variable regions(scFvs). This strategy was used to generate a panel of single chain Abs specific for the innate immunity receptor Toll‐like receptor2 (TLR2). Once generated, individual scFvs were subcloned into an expression vector allowing the production of recombinant antibodies in insect cells, thus avoiding the contamination of recombinant Abs with microbial products. This cell‐based system efficiently generates Abs that bind native molecules displayed on cell surfaces, bypasses the requirement of recombinant protein production, and avoids risks of microbial component contamination. However, an inconvenience of this strategy is that it requires construction of a new library for each target TLR. This problem might be solved by using non‐immune antibody libraries to obtain antibodies against multiple TLRs. Non‐immune libraries contain a wide variety of antibodies but these are often low affinity, while immune libraries, derived from immunized animals, containa high frequency of high affinity antibodies, but are typically limited to a single antigen. In addition, it can be difficult to produce non‐immune libraries with sufficient complexity to select Abs against multiple Ags. Because the re‐assortment of VH and VL regions that occurs during antibody library construction greatly increases library complexity, we hypothesized that an immune antibody library produced against one member of a protein family would contain antibodies specific for other members of the same protein family. Here, we tested this hypothesis by mining an existing anti‐hTLR2 antibody library for antibodies specific for other members of the TLR family. This procedure, which we refer to as homolog mining, proved to be effective. Using a cell‐based system to pan and screen our anti‐hTLR2 library, we identified single chain antibodies specific for three of the four hTLR2 homologs we targeted. The antibodies identified, anti‐murine TLR2, anti‐hTLR5, and anti‐hTLR6, bind specifically to their target, with no cross‐reactivity to hTLR2 or other TLRs tested. These results demonstrate that combinatorial re‐assortment of VH and VL fragments during Ab library construction increases Ab repertoire complexity, allowing antibody libraries produced by immunization with one antigen to be used to obtain antibodies specific to related antigens. The principle of homolog mining may be extended to other protein families and will facilitate and accelerate antibody production processes. In conclusion, we developed an entirely cell‐based method to generate antibodies that bind to native molecules on the cell surface, while eliminating the requirement of recombinant proteins and the risk of microbial component contamination. With homolog mining, this system is capable of generating antibodies not only against the original immunized Ag, but also against homologous Ags. In combination, this system proved to be an effective and efficient means for generating multiple antibodies that bind to multiple related Ags as they are displayed on cell surfaces.
Type
Dissertation
Department
Immunology
Subject
Animals
Antibody Affinity
Antibody Specificity
Biological Assay
Cell Line
Drosophila melanogaster
Humans
Immunoglobulin Fragments
Immunoglobulin Variable Region
Mice
Mice, Inbred BALB C
Mice, Inbred C57BL
Peptide Library
Receptors, Cell Surface
Recombinant Proteins
Toll-Like Receptor 2
Permalink
https://hdl.handle.net/10161/903
Citation
Chen, Yu-Hsun Jason (2008). An entirely cell-based system to generate single-chain antibodies against cell surface receptors. Dissertation, Duke University. Retrieved from https://hdl.handle.net/10161/903.
Collections
More Info
Show full item record