Understanding and Defending Against Malicious Identities in Online Social Networks 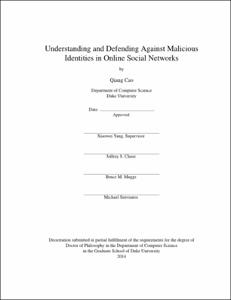 Serving more than one billion users around the world, today's online

connect and communicate with each other. However, the open nature of

OSNs attracts a constant interest in attacking and exploiting them.

In particular, they are vulnerable to various attacks launched through

accounts. In those attacks, malicious accounts are used to send out

In this dissertation, we present practical systems that we have designed

contribution of this dissertation is the approaches that leverage the fundamental

weaknesses of attackers to defeat them. We have explored defense schemes along

users. SybilRank is based on the observation that the social connections between

user-ranked list with a substantial fraction of fake accounts at the bottom,

users to O(log n) per attack edge, where n is the total number of users. We have

demonstrated the scalability of SybilRank via a prototype on Hadoop MapReduce,

and its effectiveness in the real world through a live deployment at Tuenti,

the largest OSN in Spain.

that uncovers large groups of active malicious accounts, including both fake

accounts and compromised accounts, by detecting their loosely synchronized actions.

perform loosely synchronized actions to accomplish an attack mission, due to

into a scalable clustering algorithm. It uncovers large groups of accounts

that act similarly at around the same time for a sustained period of time. To

basis but aggregates the computational results over the continuous data stream.

We implemented SynchroTrap on Hadoop and Giraph, and we deployed it on Facebook

and Instagram. This deployment has resulted in the unveiling of millions of malicious

accounts and thousands of large attack campaigns per month.