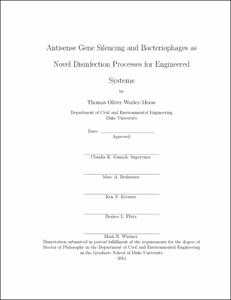 The growth and proliferation of invasive bacteria in engineered systems is an ongoing problem. While there are a variety of physical and chemical processes to remove and inactivate bacterial pathogens, there are many situations in which these tools are no longer effective or appropriate for the treatment of a microbial target. For example, certain strains of bacteria are becoming resistant to commonly used disinfectants, such as chlorine and UV. Additionally, the overuse of antibiotics has contributed to the spread of antibiotic resistance, and there is concern that wastewater treatment processes are contributing to the spread of antibiotic resistant bacteria.

Due to the continually evolving nature of bacteria, it is difficult to develop methods for universal bacterial control in a wide range of engineered systems, as many of our treatment processes are static in nature. Still, invasive bacteria are present in many natural and engineered systems, where the application of broad acting disinfectants is impractical, because their use may inhibit the original desired bioprocesses. Therefore, to better control the growth of treatment resistant bacteria and to address limitations with the current disinfection processes, novel tools that are both specific and adaptable need to be developed and characterized.

In this dissertation, two possible biological disinfection processes were investigated for use in controlling invasive bacteria in engineered systems. First, antisense gene silencing, which is the specific use of oligonucleotides to silence gene expression, was investigated. This work was followed by the investigation of bacteriophages (phages), which are viruses that are specific to bacteria, in engineered systems.

In addition to determining disinfection rates, the long-term bacterial growth inhibition potential was determined for a variety of phages with both Gram-negative and Gram-positive bacteria. It was determined, that on average, phages can be used to inhibit bacterial growth for up to 24 h, and that this effect was concentration dependent for various phages at specific time points. Additionally, it was found that a phage cocktail was no more effective at inhibiting bacterial growth over the long-term than the best performing phage in isolation.

In conclusion, this dissertation improved the current methods for designing antisense gene silencing targets for prokaryotic organisms, and characterized phages from an engineering perspective. First, the current design strategy for antisense targets in prokaryotic organisms was improved through the development of an algorithm that minimized the number of off-targets. For the phage work, a framework was developed to predict the disinfection rates in terms of the initial phage and bacterial concentrations. In addition, the long-term bacterial growth inhibition potential of multiple phages was determined for several bacteria. In regard to the phage application, phages were shown to protect both final product yields and yeast concentrations during fermentation. Taken together, this work suggests that the rational design of phage treatment is possible and further work is needed to expand on this foundation.