Citizens in Fear: Political Participation and Voting Behavior in the Midst of Violence 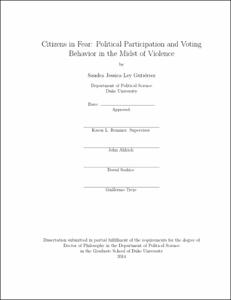 How does violence affect political participation and voting behavior? Why does a violent context push some to be politically active, while others decide to stay at home? Our current understanding of political behavior is mostly derived from analyses conducted in a peaceful and democratic context, or in post-conflict periods. However, citizens in many developing countries make their political decisions in the midst of violence.

The dissertation's central argument is that political participation and voting behavior largely depend on the context surrounding the individual. In particular, the level of criminal violence greatly impacts 1) citizens' decision to participate politically, 2) their forms of participation, and 3) the logic of their vote choice. Faced with violence, voters are generally pushed away from electoral politics. I argue that those that do decide to take part of the electoral process will consider their evaluations of security when deciding to punish or reward the incumbent government. While some may be inclined to take further action and demand peace through non-electoral participation, such a decision carries certain risks that are not easily overcome. I contend that social networks can encourage participation by shaping the understanding of crime, as well as the perception of costs and benefits associated with participation amid violence.

To evaluate this argument, I draw on a rich array of sources. I designed an original post-electoral survey that took place in Mexico a few days after the 2012 presidential election. I also created a novel newspaper databank of protests against crime in Mexico during the 2006-2012 period. In addition, together with Guillermo Trejo, I developed a unique dataset on criminal violence in Mexico. My statistical evidence is complemented with participant observation in marches for peace and qualitative in-depth interviews with victims and non-victims of crime in four Mexican cities.

Statistical evidence shows that violent criminal activity depresses electoral turnout. Voters living in violent contexts are less likely to participate in elections. Victims of crime are significantly less likely to participate in elections. However, faced with rising violence, active voters are able to consider both economic and insecurity evaluations in their assessments of government performance and voting decisions. Overall, as a voter's evaluation of national security worsens, her likelihood of supporting the incumbent national party and government diminishes. At the same time, while institutional channels are not attractive to victims of crime, societal accountability mechanisms are also available to citizens affected by insecurity. Victims of crime and those connected to mobilizing networks are more likely to participate in protests against insecurity than non-victims and "socially disconnected" individuals.