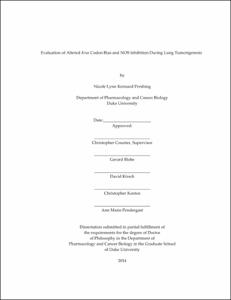 The small GTPases <italic>HRAS, <italic>NRAS and <italic>KRAS are mutated in approximately one-third of all human cancers, rendering the proteins constitutively active and oncogenic. Lung cancer is the leading cause of cancer deaths worldwide, and more than 20% of human lung cancers harbor mutations in <italic>RAS, with 98% of those occurring in the <italic>KRAS isoform. While there have been many advances in the understanding of <italic>KRAS&ndash;driven lung tumorigenesis, it remains a therapeutic challenge. To further this understanding and assess novel approaches for treatment, I have investigated two aspects of <italic>Kras&ndash;driven tumorigenesis in the lung:

(<italic>I) Despite nearly identical protein sequences, the three <italic>RAS proto-oncogenes exhibit divergent codon usage. Of the three isoforms, <italic>KRAS contains the most rare codons resulting in lower levels of KRAS protein expression relative to <italic>HRAS and <italic>NRAS. To determine the consequences of rare codon bias during <italic>de <italic>novo tumorigenesis, we created a knock-in <italic>Kras<super>ex3op mouse in which synonymous mutations in exon 3 converted codons from rare to common. These mice had reduced tumor burden and fewer oncogenic mutations in the <italic>Kras<super>ex3op allele following carcinogen exposure. The reduction in tumorigenesis appeared to be a product of rare codons affecting both the oncogenic and non&ndash;oncogenic alleles. Converting rare codons to common codons yielded a more potent oncogenic allele that promoted growth arrest and enhanced tumor suppression by the non-oncogenic allele. Thus, rare codons play an integral role in <italic>Kras tumorigenesis.

(<italic>II) Lung cancer patients exhale higher levels of NO and <italic>iNOS<super>-/- mice are resistant to chemically induced lung tumorigenesis. I hypothesize that NO promotes <italic>Kras&ndash;driven lung adenocarcinoma, and NOS inhibition may decrease <italic>Kras&ndash;driven lung tumorigenesis. To test this hypothesis, I assessed efficacy of the NOS inhibitor L&ndash;NAME in a genetically engineered mouse model of <italic>Kras-driven lung adenocarcinoma. Adenoviral Cre recombinase was delivered into the lungs intranasally, resulting in expression of oncogenic <italic>Kras<super>G12D and dominant-negative <italic>Trp53<super>R172H in lung epithelial cells. L&ndash;NAME treatment was provided in the water and continued until survival endpoints. In this model, L&ndash;NAME treatment decreased tumor growth and prolonged survival. These data establish a potential clinical role for NOS inhibition in lung cancer treatment.