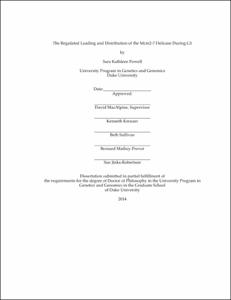 DNA replication is the process of synthesizing an exact copy of a genome during S-phase. DNA replication must only occur once and only once in the cell cycle. Therefore, the DNA replication program is a highly regulated process that is established prior to S-phase. In G1, the protein complexes that define an origin of replication are assembled stepwise onto chromatin. Potential origins of replication are first bound by ORC, origin recognition complex. ORC then recruits other factors that load the Mcm2-7 helicase onto the chromatin to assemble a pre-RC, pre-replication complex. Paradoxically, there is a vast excess of Mcm2-7 relative to ORC assembled onto chromatin in G1. These excess Mcm2-7 are broadly distributed on chromatin, exhibit little co-localization with ORC or replication foci, and can function as dormant origins. I used biochemical and genomic approaches to dissect the mechanisms regulating the assembly and distribution of the Mcm2-7 complex in Drosophila tissue culture cells. I found that Mcm2-7 loading occurs in two distinct phases during G1. In the first phase, limiting amounts of Mcm2-7 are loaded at ORC binding sites in a cyclin E/Cdk2 independent manner. Subsequently, there is a cyclin E/Cdk2 kinase activity dependent phase of Mcm2-7 loading that results in a 15-fold increase in chromatin associated Mcm2-7 and a dramatic genome-wide reorganization of the distribution of Mcm2-7 that is shaped by active transcription. Thus, increasing cyclin E/Cdk2 kinase activity over the course of G1 is not only critical for Mcm2-7 loading, but also the distribution of the Mcm2-7 helicase prior to S-phase entry.

The assembly of the pre-RC is not only required for DNA replication, but it has been implicated in being required for cohesin loading. The cohesin complex imparts cohesion between sister chromatids as they are replicated and remains in place until the sister chromatids are separated in mitosis. I assessed if pre-RC assembly is required for cohesin loading using genomic and biochemical approaches in Drosophila tissue culture cells. I found that pre-RC components co-localize with cohesin subunits throughout the Drosophila genome. I was unable to detect any cohesin loading onto chromatin mediated by pre-RC assembly or components in vivo. However, this result does not mean that they are not coordinated.

Any errors during DNA replication can cause genomic instability through rereplication, fragile sites, or stalled forks. In addition, other processes like sister chromatid cohesion that are coordinated with DNA replication can also introduce genomic instability. Aneuploidy is a potential consequence of sister chromatid cohesion defects resulting in unequal multiples of a genome within a cell. Aneuploidy can be detrimental to a cell or organism due to copy number variation (CNV) causing differences in expression of genes. However, cells are able to compensate for CNV between the sexes due to the differences in the number of sex chromosomes. I used genomic approaches to characterize three aneuploid Drosophila cell lines for the modENCODE project. I further characterized the S2 Drosophila cell line using immunofluorescence microcopy approaches to identify the chromosomal rearrangements that were mapped by de novo assembly of the genome. Both approaches showed that the S2 cell line has highly rearranged chromosomes. The S2 cell line was also analyzed to address if cells can compensate for CNV on autosomes using genomic approaches. In collaboration with the Oliver group (NIH) we found that S2 cells are able to compensate for CNV of autosomal genes by buffering gene expression.

In summary, my research explored mechanisms that a cell can employ to maintain genomic stability: assembly of dormant origins, chromosome segregation, and CNV compensation.