Speculative Physics: the Ontology of Theory and Experiment in High Energy Particle Physics and Science Fiction 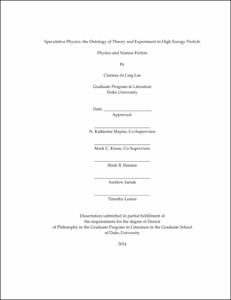 The dissertation brings together approaches across the fields of physics, critical theory, literary studies, philosophy of physics, sociology of science, and history of science to synthesize a hybrid approach for instigating more rigorous and intense cross-disciplinary interrogations between the sciences and the humanities. I explore the concept of speculation in particle physics and science fiction to examine emergent critical approaches for working in the two areas of literature and physics (the latter through critical science studies), but with the expectation of contributing new insights to media theory, critical code studies, and also the science studies of science fiction.

There are two levels of conversations going on in the dissertation; at the first level, the discussion is centered on a critical historiography and philosophical implications of the discovery Higgs boson in relation to its position at the intersection of old (current) and the potential for new possibilities in quantum physics; I then position my findings on the Higgs boson in connection to the double-slit experiment that represents foundational inquiries into quantum physics, to demonstrate the bridge between fundamental physics and high energy particle physics. The conceptualization of the variants of the double-slit experiment informs the aforementioned critical comparisons. At the second level of the conversation, theories are produced from a close study of the physics objects as speculative engine for new knowledge generation that are then reconceptualized and re-articulated for extrapolation into the speculative ontology of hard science fiction, particularly the hard science fiction written with the double intent of speaking to the science while producing imaginative and socially conscious science through the literary affordances of science fiction. The works of science fiction examined here demonstrate the tension between the internal values of physics in the practice of theory and experiment and questions on ethics, culture, and morality.

Nevertheless, the dissertation hopes to show the beginnings of a possibility, through the contentious but generative space provided by speculative physics, to produce more cross-collaborative thinking between physics as represented by the hard sciences, and science fiction representing the objects of literary enterprise and creative evolution.