The Function and Regulation of Photobodies in Phytochrome Signaling 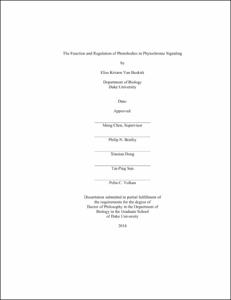 Light is a critical environmental signal that regulates every phase of the plant life cycle, from germination to floral initiation. Of the many light receptors in the model plant <italic>Arabidopsis thaliana</italic>, the red- and far-red light-sensing phytochromes (phys) are arguably the best studied, but the earliest events in the phy signaling pathway remain poorly understood. One of the earliest phy signaling events is the translocation of photoactivated phys from the cytoplasm to the nucleus, where they localize to subnuclear foci termed photobodies; in continuous light, photobody localization correlates closely with the light-dependent inhibition of embryonic stem growth. Despite a growing body of evidence supporting the biological significance of photobodies in light signaling, photobodies have also been shown to be dispensable for seedling growth inhibition in continuous light, so their physiological importance remains controversial; additionally, the molecular components that are required for phy localization to photobodies are largely unknown. The overall goal of my dissertation research was to gain insight into the early steps of phy signaling by further defining the role of photobodies in this process and identifying additional intragenic and extragenic requirements for phy localization to photobodies.

Even though the domain structure of phys has been extensively studied, not all of the intramolecular requirements for phy localization to photobodies are known. Previous studies have shown that the entire C-terminus of phys is both necessary and sufficient for their localization to photobodies. However, the importance of the individual subdomains of the C-terminus is still unclear. For example a truncation lacking part of the most C-terminal domain, the histidine kinase-related domain (HKRD), can still localize to small photobodies in the light and behaves like a weak allele. However, a point mutation within the HKRD renders the entire molecule completely inactive. To resolve this discrepancy, I explored the hypothesis that this point mutation might impair the dimerization of the HKRD; dimerization has been shown to occur via the C-terminus of phy and is required for more efficient signaling. I show that this point mutation impairs nuclear localization of phy as well as its subnuclear localization to photobodies. Additionally, yeast-two-hybrid analysis shows that the wild-type HKRD can homodimerize but that the HKRD containing the point mutation fails to dimerize with both itself and with wild-type HKRD. These results demonstrate that dimerization of the HKRD is required for both nuclear and photobody localization of phy.

Studies of seedlings grown in diurnal conditions show that photoactivated phy can persist into darkness to repress seedling growth; a seedling's growth rate is therefore fastest at the end of the night. To test the idea that photobodies could be involved in regulating seedling growth in the dark, I compared the growth of two transgenic Arabidopsis lines, one in which phy can localize to photobodies (<italic>PBG</italic>), and one in which it cannot (<italic>NGB</italic>). Despite these differences in photobody morphology, both lines are capable of transducing light signals and inhibiting seedling growth in continuous light. After the transition from red light to darkness, the PBG line was able to repress seedling growth, as well as the accumulation of the growth-promoting, light-labile transcription factor PHYTOCHROME INTERACTING FACTOR 3 (PIF3), for eighteen hours, and this correlated perfectly with the presence of photobodies. Reducing the amount of active phy by either reducing the light intensity or adding a phy-inactivating far-red pulse prior to darkness led to faster accumulation of PIF3 and earlier seedling growth. In contrast, the <italic>NGB</italic> line accumulated PIF3 even in the light, and seedling growth was only repressed for six hours; this behavior was similar in <italic>NGB</italic> regardless of the light treatment. These results suggest that photobodies are required for the degradation of PIF3 and for the prolonged stabilization of active phy in darkness. They also support the hypothesis that photobody localization of phys could serve as an instructive cue during the light-to-dark transition, thereby fine-tuning light-dependent responses in darkness.

In addition to determining an intragenic requirement for photobody localization and further exploring the significance of photobodies in phy signaling, I wanted to identify extragenic regulators of photobody localization. A recent study identified one such factor, HEMERA (HMR); <italic>hmr</italic> mutants do not form large photobodies, and they are tall and albino in the light. To identify other components in the HMR-mediated branch of the phy signaling pathway, I performed a forward genetic screen for suppressors of a weak <italic>hmr</italic> allele. Surprisingly, the first three mutants isolated from the screen were alleles of the same novel gene, <italic>SON OF HEMERA</italic> (<italic>SOH</italic>). The <italic>soh</italic> mutations rescue all of the phenotypes associated with the weak <italic>hmr</italic> allele, and they do so in an allele-specific manner, suggesting a direct interaction between SOH and HMR. Null <italic>soh</italic> alleles, which were isolated in an independent, tall, albino screen, are defective in photobody localization, demonstrating that SOH is an extragenic regulator of phy localization to photobodies that works in the same genetic pathway as HMR.