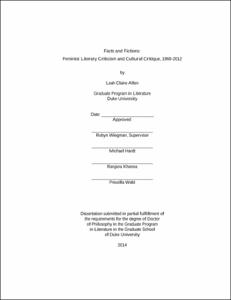 "Facts and Fictions: Feminist Literary Criticism and Cultural Critique, 1968-2012" is a critical history of the unfolding of feminist literary study in the US academy. It contributes to current scholarly efforts to revisit the 1970s by reconsidering often-repeated narratives about the critical naivety of feminist literary criticism in its initial articulation. As the story now goes, many of the most prominent feminist thinkers of the period engaged in unsophisticated literary analysis by conflating lived social reality with textual representation when they read works of literature as documentary evidence of real life. As a result, the work of these "bad critics," particularly Kate Millett and Andrea Dworkin, has not been fully accounted for in literary critical terms.

This dissertation returns to Dworkin and Millett's work to argue for a different history of feminist literary criticism. Rather than dismiss their work for its conflation of fact and fiction, I pay attention to the complexity at the heart of it, yielding a new perspective on the history and persistence of the struggle to use literary texts for feminist political ends. Dworkin and Millett established the centrality of reality and representation to the feminist canon debates of "the long 1970s," the sex wars of the 1980s, and the more recent feminist turn to memoir. I read these productive periods in feminist literary criticism from 1968 to 2012 through their varied commitment to literary works.

Chapter One begins with Millett, who de-aestheticized male-authored texts to treat patriarchal literature in relation to culture and ideology. Her mode of literary interpretation was so far afield from the established methods of New Criticism that she was not understood as a literary critic. She was repudiated in the feminist literary criticism that followed her and sought sympathetic methods for reading women's writing. In that decade, the subject of Chapter Two, feminist literary critics began to judge texts on the basis of their ability to accurately depict the reality of women's experiences.

Their vision of the relationship between life and fiction shaped arguments about pornography during the sex wars of the 1980s, the subject of Chapter Three. In this context, Dworkin was feminism's "bad critic." I focus on the literary critical elements of Dworkin's theories of pornographic representation and align her with Millett as a miscategorized literary critic. In the decades following the sex wars, many of the key feminist literary critics of the founding generation (including Dworkin, Jane Gallop, Carolyn Heilbrun, and Millett) wrote memoirs that recounted, largely in experiential terms, the history this dissertation examines. Chapter Four considers the story these memoirists told about the rise and fall of feminist literary criticism. I close with an epilogue on the place of literature in a feminist critical enterprise that has shifted toward privileging theory.