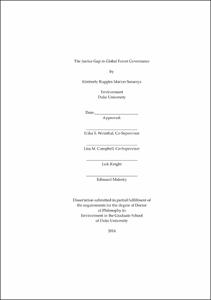 Claims of injustice in global forest governance are prolific: assertions of colonization, marginalization and disenfranchisement of forest-dependent people, and privatization of common resources are some of the most severe allegations of injustice resulting from globally-driven forest conservation initiatives. At its core, the debate over the future of the world's forests is fraught with ethical concerns. Policy makers are not only deciding how forests should be governed, but also who will be winners, losers, and who should have a voice in the decision-making processes. For 30 years, policy makers have sought to redress the concerns of the world's 1.6 billion forest-dependent poor by introducing rights-based and participatory approaches to conservation. Despite these efforts, however, claims of injustice persist. This research examines possible explanations for continued claims of injustice by asking: What are the barriers to delivering justice to forest-dependent communities? Using data collected through surveys, interviews, and collaborative event ethnography in Laos and at the Tenth Conference of Parties to the Convention on Biological Diversity, this dissertation examines the pursuit of justice in global forest governance across multiple scales of governance. The findings reveal that particular conceptualizations of justice have become a central part of the metanormative fabric of global environmental governance, inhibiting institutional evolution and therewith perpetuating the justice gap in global forest governance.