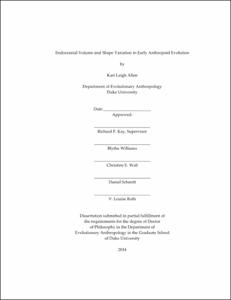 Fossil taxa are crucial to studies of brain evolution, as they allow us to identify evolutionary trends in relative brain size and brain shape that may not otherwise be identifiable in comparative studies using only extant taxa, owing to multiple events of parallel encephalization among primate clades. This thesis combines indirect and direct approaches to understanding primate evolution, by evaluating variation in the endocranial morphology of extant primates and their fossil representatives. I use a comparative approach to examine the relationships between interspecific adult endocranial volume and shape, and brain evolution and cranial form among extant primate clades and their fossil representatives. The associations are evaluated via phylogenetically informed statistics perfomed on volumetric measurements and three-dimensional geometric morphometric analyses of virtual endocasts constructed from micro-CT scans of primate crania. Fossil taxa included in these analyses are: 1) anthropoids Parapithecus, Aegyptopithecus (Early Oligocene, Egypt), Homunculus and Tremacebus (Early Miocene, Argentina), and 2) Eocene euprimates Adapis and Leptadapis (Eocene adapoids, France), and the Rooneyia (Eocene omomyoid, Texas).

The first part of this work (Chapter 2) explores variation in residual mass of brain components (taken from the literature) among primates, and evaluates the correlated evolution of encephalization and brain proportions with endocast shape, quantified via three-dimensional geometric morphometric techniques. Analyses reveal a broad range of variation in endocast shape among primates. Endocast shape is influenced by a complex array of factors, including phylogeny, body size, encephalization, and brain proportions (residual mass of brain components). The analysis supports previous research, which concludes that anthropoids and tarsiers (Haplorhini) share the enlargement of several key brain regions including the neocortex and visual systems, and a reduction of the olfactory system. Anthropoids further differ from strepsirrhines in endocranial features associated with encephalization--a more flexed brain base, an inferiorly deflected olfactory fossa--and those associated with brain proportions--a small olfactory fossa, and a more caudally extended cerebrum that extends posteriorly past the cerebellar poles. Tarsiers are unique in having a mediolaterally broad and rostro-caudally short endocast with an attenuated anterior and middle cranial fossae. This morphology is likely related to the extreme orbital enlargement in this taxon, which limits anterior expansion of the endocranium. Finally, despite the correlation between residual endocranial volume and endocast shape among modern primates, early anthropoid fossils demonstrate a disconnect between these factors in sharing key features of endocast shape with extant anthropoids at a relatively small brain size.

The second part of this thesis (Chapter 3) explores the relationship between craniofacial organization--cranial base angle, facial size, facial hafting--and encephalization via the lens of the Spatial Constraints and Facial Packing Hypotheses. These hypotheses predict that interspecific adult variation in encephalization correlates with endocranial shape such that a larger brain for a given body size will be more "globular" or spherical in shape. These hypotheses futher predict that basicranial angle covaries with encephalization and that the relative size of the endocranium and facial skeleton will have an antagonistic effect on basicranial angle and facial hafting. Results show that various measures of globularity have inconsistent and weak relationships to phylogeny, encephalization, and basicranial flexion, owing to a diversity of clade-specific scaling patterns between the maximum length, breadth, and width of the endocast. Among extant primates, there is weak but significant evidence to suggest that both facial size and encephalization influence variation in basicranial flexion. Considering the fossil specimens in isolation, their relative ranks in encephalization, basicranial flexion, and midline facial size and shape follow the pattern expected from the Spatial and Facial Packing Hypotheses outlined above; however, relative to modern species, the early fossil anthropoids have more flexed cranial bases and shorter facial skeletons at much smaller level of encephalization than seen in modern anthropoids.

Together, the extant data suggest a moderately conserved pattern of correlated evolution among endocranial size, endocranial shape, brain proportions, and craniofacial organization, which may explain differences in endocranial and facial shape between extant strepsirrhine and anthropoid primates; however, the fossil record for early anthropoid evolution demonstrates that a shift towards key anthropoid-like traits of the endocranium, basicranium, and facial skeleton were initiated early in anthropoid evolution, with subsequent encephalization occurring within and among members of this clade. Thus, these anthropoid cranial traits evolved in tandem with changes in the relative size of brain components, rather than absolute or relative brain size alone. Basicranial flexion, facial length and orientation are influenced by both: 1) shifts in endocranial shape associated with changes in brain proportion--accounting for the initiation of the anthropoid-like craniofacial plan early in the evolution of the clade--and 2) encephalization, which influenced subsequent morphological divergence among extant anthropoid groups.