Toll like Receptor 4-Mediated Immune Responses in the Bladder Epithelium 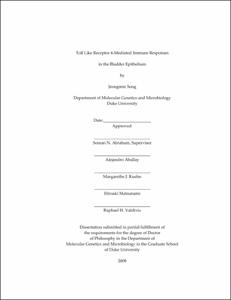 The urinary tract is one of the most intractable mucosal surfaces for pathogens to colonize. In addition to the natural barriers at this site, potential pathogens have to contend with the vigorous local innate immune response that is initiated by engagement of surveillance molecule TLRs. TLR4 appears to be not only exclusively expressed on superficial BECs but also critical to triggering robust local innate immune responses. TLR4 recognizes Gram-negative bacterial component LPS and initiates a series of intracellular NF-kappaB associated signaling events resulting in a cytokine response. We examined intracellular signaling events in human BECs leading to the production of IL-6, a major urinary cytokine, following activation by E. coli and isolated LPS, and observed that, in addition to the classical NF-kappaB associated pathway, BEC TLR4 triggers a distinct and more rapid signaling response involving, sequentially, Ca2+, AC3 generated cAMP, and the transcriptional factor CREB. This capacity of BECs to mobilize secondary messengers and evoke a more rapid IL-6 response might be critical in their role as first responders to microbial challenge in the urinary tract.

Here, we also report two additional distinct TLR4-mediated defense mechanisms in BECs. First, BEC TLR4 inhibits bacterial invasion, a necessary step for successful infection. TLR4-mediated suppression of bacterial invasion was linked to increased intracellular cAMP levels which negatively impacted Rac-1 mediated mobilization of the cytoskeleton. Additionally, we found that BECs continue to fight UPEC even after bacterial invasion by triggering bacterial exocytosis through a distinct TLR4-mediated mechanism following activation by LPS. In addition, we reveal that Caveolin-1, Rab27b, PKA, and MyRIP are components of the exocytic compartment and that they form a complex involved in the exocytosis of bacteria. The ability of TLR4 to mediate the rapid cytokine response, the inhibition of bacterial invasion, and the expulsion of intracellular bacteria from infected cells represents three previously unrecognized functions for this innate immune receptor.