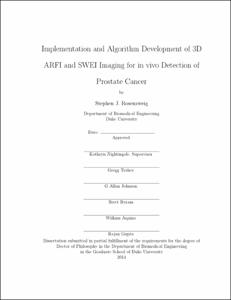 Prostate cancer (PCa) is the most common non-cutaneous cancer in men with an estimated almost 30,000 deaths occurring in the United States in 2014. Currently, the most widely utilized methods for screening men for prostate cancer include the digital rectal exam and prostate specific antigen analysis; however, these methods lack either high sensitivity or specificity, requiring needle biopsy to confirm the presence of cancer. The biopsies are conventionally performed with only B-mode ultrasound visualization of the organ and no targeting of specific regions of the prostate, although recently, multi-parametric magnetic resonance imaging has shown promise for targeting biopsies. Earlier work has demonstrated the feasibility of acoustic radiation force impulse (ARFI) imaging and shear wave elasticity imaging (SWEI) to visualize cancer in the prostate, however multiple challenges with both methods have been identified.

The aim of this thesis is to contribute to both the technical development and clinical applications of ARFI and SWEI imaging using the latest advancements in ultrasound imaging technology.

The introduction of the Siemens Acuson SC2000 provided multiple technological improvements over previous generations of ultrasound scanners, including: an improved power supply, arbitrary waveform generator, and additional parallel receive beamforming. In this thesis, these capabilities were utilized to improve both ARFI and SWEI imaging and reduce acoustic exposure and acquisition duration. However, the SC2000 did not originally have radiation force imaging capabilities; therefore, a new tool set for prototyping these sequences was developed along with rapid data processing and display code. These tools leveraged the increasing availability of general purpose computing on graphics processing units (GPUs) to significantly reduce the data processing time, facilitating real-time display for ultrasonic research systems.

These technical developments for both acquisition and processing were applied to investigate new methods for ARFI and SWEI imaging. Specifically, the power supply on the SC2000 allowed for a new type of multi-focal zone ARFI images to be acquired, which are shown to provide improved image quality over an extended depth of field. Additionally, a new algorithm for SWEI image processing was developed using an adaptive filter based on a maximum a posteriori estimator, demonstrating increases in the contrast to noise ratio of lesion targets upwards of 50%.

Finally, the optimized ARFI imaging methods were integrated with a transrectal ultrasound transducer to acquire volumetric in vivo data in patients undergoing robotic radical prostatectomy procedures in an ongoing study. When the study was initiated, it was recognized that the technological improvements of Siemens Acuson SC2000 allowed for the off-axis response to the radiation force excitation to be concurrently recorded without impacting ARFI image quality. This volumetric SWEI data was reconstructed retrospectively using the approaches developed in this thesis, but the images were low quality. A further investigation identified multiple challenges with the SWEI sequence, which should be addressed in future studies. The ARFI image volumes were very high quality and are currently being analyzed to assess the accuracy of ARFI to visualize prostate anatomy and clinically significant prostate cancer tumors. After a blinded evaluation of the ARFI image volumes for suspicion of prostate cancer, three readers correctly identified 63% of all clinically significant tumors and 74% of clinically significant tumors in the posterior region, showing great promise for using ARFI in the context of prostate cancer visualization for targeting biopsies, focal therapy, and watchful waiting.