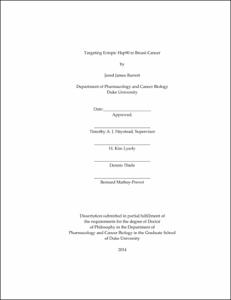 On the surface heat shock protein 90 (Hsp90) is an unlikely drug target for the treatment of any disease, let alone cancer. Hsp90 is highly conserved and ubiquitously expressed in all cells. There are four major isoforms encoded by distinct genes and together they may constitute 1-3% of the cellular protein. Genetic deletion results in nonviable phenotypes in some organisms, and there are no recognized polymorphisms suggesting an association or causal relationship with any human disease. With respect to cancer, the proteins absence from some recent high profile articles underlines the perception that it is an unlikely bona fide target to treat this disease. Yet, to date, there are 17 distinct Hsp90 inhibitors in clinical trials for multiple indications in cancer. The protein has been championed for over 20 years by the National Cancer Institute as a cancer target since the discovery of the antitumor activity of geldanamycin. Rather than focus on the intracellular inhibition of Hsp90, we have shifted our aim to the differences of Hsp90 between cancer and normal tissue, namely its extracellular expression.

My graduate thesis work has focused on the characterization of a series of novel small molecule imaging agents (fluor-tethered Hsp90 inhibitors) that enable the specific detection of ectopically expressed Hsp90 on tumor cells. We believe that these molecules will have a large impact in the near future on the diagnosis and treatment of metastatic breast cancer as well as other cancers. This hypothesis is based on recent findings in the clinical literature that have linked upregulation of Hsp90 with poor outcomes in multiple subtypes of breast cancer. Additionally, several papers have also reported an association of the expression of extracellular Hsp90 and metastatic progression in several human cancers. Hsp90 is currently considered by some as a cutting edge cancer drug target. The Haystead lab synthesized a series of tethered Hsp90 inhibitors that were modified with fluorophores and other imaging moieties in such a way as to preserve the binding to Hsp90 and enable detection through non-invasive imaging techniques. In a series of cell-based, live animal and biochemical studies we demonstrated that these molecules are highly selective for Hsp90 and can be used to specifically recognize intact tumor cells expressing ectopic Hsp90. Furthermore, we also observed that once bound to ectopic Hsp90, our tethered-inhibitors are actively internalized and this process can be blocked with Hsp90 antibodies. These findings have two implications; first, Hsp90 is undergoing active cycling at the plasma membrane; second, the finding that once bound to surface Hsp90 our fluor-tethered inhibitors can be internalized despite their polar nature. These results suggest a new therapeutic strategy that will enable specific delivery of tumor killing agents (e.g. 131I or metabolic poisons) to metastatic cells. This is unique because the use of small molecule inhibitors and not antibody- or nanoparticle-based payload delivery strategies offers advantages in formulation, cost and reproducibility.

In addition to payload delivery possibilities, we also show the utility of the tethered-inhibitors diagnostically by demonstrating their use in the detection of tumors in mouse models of human breast cancer. As a result of our animal studies, we believe our molecules in their present form could be used to address a currently unmet need in the early diagnosis of aggressive breast cancer and discriminating this from more indolent forms.

Furthermore, the tethered Hsp90 inhibitors have been used to make ligand affinity chromatography resins that have facilitated the discovery of other unique Hsp90 expressions and functions associated with cancer. We have found a pool of Hsp90 that is misfolded as determined by affinity chromatography depletion and a leftward thermal stability shift in the population of Hsp90 that flows through the ligand affinity resins. Differential trypsin digest patterns detected by mass spectrometry reveal also that the native protein has sites that are more accessible to trypsinization. This could have further implications in treating and detecting differences between cancerous tissues and normal tissues by designing an antibody that recognizes the exposed portions of the misfolded Hsp90. Together this body of work illustrates that not only is Hsp90 different in total expression levels in cancers, but is ectopically expressed and misfolded so as to provide other opportunities for therapeutic intervention that improve the safety for more clinical applications.