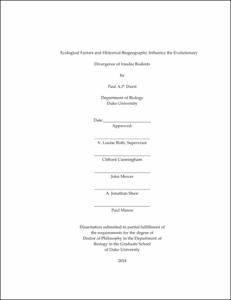 Islands have been the inspiration for some of evolutionary biology's most important advances. This is largely due to the unique properties of islands that promote the differentiation of island species from their mainland counterparts. Rodents are widely distributed across even the most remote islands, a rarity among mammals, making them uniquely suited to study the factors leading to the divergence of insular species. In this dissertation, I use two case studies to examine the morphological and genetic divergences that take place in an insular environment.

In chapters one and two, I examine how different factors influence insular body size change in rodents. In chapter one, I examine factors influencing the direction of island body size change using classification tree and random forest (CART) analyses. I observe strong consistency in the direction of size change within islands and within species, but little consistency at broader taxonomic scales. Including island and species traits in the CART analyses, I find mainland body mass to be the most important factor influencing size change. Other variables are significant, though their roles seem to be context-dependent.

Chapters three and four shift their focus to a single rodent species, the deer mouse <italic>Peromyscus maniculatus</italic>, as they examine the genetic differentiation of deer mice across the California Channel Islands and the nearby mainland. In chapter three, I sequence a region of the mitochondrial control region for individuals from 8 populations across the northern Channel Islands and two mainland sites, and I analyze these sequences by calculating population genetics parameters and creating a Bayesian inference tree and a statistical parsimony haplotype network. All of these analyses reveal significant divergences between island and mainland populations. Among the islands, Santa Barbara and Anacapa islands both display unique genetic signatures, but the other northern islands remain relatively undifferentiated.

In chapter four, I genotype individuals from the previous chapter at 5 microsatellite loci, I calculate additional population genetics parameters and I utilize a Bayesian clustering algorithm to examine the similarities and differences between nuclear and mitochondrial analyses. I find the nuclear data to be largely congruent with the mitochondrial analyses; there are significant differences between island and mainland populations, and Anacapa Island is significantly differentiated from the other islands. Unlike the previous analyses, Santa Barbara Island is not significantly different from the northern islands, yet San Miguel Island has a unique genetic signature.

These studies underscore the importance of ecological processes and historical biogeography in the generation of diversity, and they highlight the role of islands as drivers of evolutionary divergence.