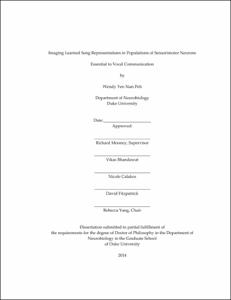 Perceiving or producing complex vocalizations such as speech and birdsongs require the coordinated activity of neuronal populations, and these activity patterns can vary over space and time. How learned communication signals are represented by populations of sensorimotor neurons essential to vocal perception and production remains poorly understood. Using a combination of two-photon calcium imaging, intracellular electrophysiological recording and retrograde tracing methods in anesthetized adult male zebra finches (<italic>Taeniopygia guttata</italic>), I addressed how the bird's own song and its component syllables are represented by the spatiotemporal patterns of activity of two spatially intermingled populations of projection neurons (PNs) in HVC, a sensorimotor area required for song perception and production. These experiments revealed that neighboring PNs can respond at markedly different times to song playback and that different syllables activate spatially intermingled HVC PNs within a small region. Moreover, noise correlation analysis reveals enhanced functional connectivity between PNs that respond most strongly to the same syllable and also provides evidence of a spatial gradient of functional connectivity specific to PNs that project to song motor nucleus (i.e. HVCRA cells). These findings support a model in which syllabic and temporal features of song are represented by spatially intermingled PNs functionally organized into cell- and syllable-type networks.