The Political Economy of Decline 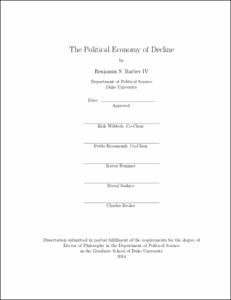 Declining industries are privileged at the expense of new innovative ones in some cities but not others. In order to understand why, I develop an argument about how politics aggregates the demand for industrial rents across space. Geographically concentrated industries produce electorates with homogenous preferences in favor of supporting established local firms. In electoral systems where politicians are beholden to voters in a narrow geographic constituency, politicians will support efforts to prop up these industries even as these measures stymie innovation. Conversely, in electoral systems where politicians are beholden to broad party interests, politicians will support nationally important and geographically dispersed industries. Concentrated industries, by contrast, are more likely to die a rapid death and leave public resources available for new pioneering firms. Thus, the intersection between electoral and political geography provides insight into the Schumpeterian creative destruction needed to transform a city into a post-industrial economy. I formalize my argument in two models: one analyzing the demand of subsidies over public goods by voters and another exploring the tradeoff between rent-seeking and innovation by firms. I test the resulting hypotheses through cross-country statistical regressions and two in-depth case studies. Using firm-level data across many countries I show that political geography conditions the provision of subsidies to declining firms, and that electorally important firms are less likely to innovate. Then, using original field data I investigate the causal impact of political institutions and economic geography on the provision of subsidies by utilizing exogenous shocks in Thailand and India.