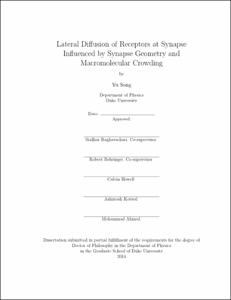 Cells express a variety of proteins on their surface that allows them to sample the world. These proteins are embedded in the plasma membrane, a bilayer of lipids that surrounds the cell. Since the lipid and protein dimensions are in the nanometer range, they are subject to thermal agitation by water molecules and show characteristic diffusive motion. The diffusive movement of these proteins plays a critical role in the cell's ability to react to external signals and regulate its internal environment.

One prominent application of protein diffusion is in the synaptic connection, where is the highly localized concentration of receptors. The receptive dendrite membrane contains many types of receptors that are accumulated to form functional microdomains opposite the presynaptic terminal buttons that release neurotransmitters. Experiments reveal that receptors move from extrasynaptic locations to synaptic locations by lateral diffusion, thereby concentrating receptors at synapses. Two key processes that control synaptic AMPAR numbers are receptor diffusion within the synaptic and extrasynaptic space and interactions between receptors and PSD scaffold proteins. Electron microscopy images suggest that the PSD is highly crowded potentially limiting the ability of receptors to diffuse and interact with scaffold proteins. However, the contribution of macromolecular crowding to receptor retention remains to be tested systematically.

Here, we combine experimental and computational approaches to test the effect of synaptic steric hindrance on receptor mobility and enrichment. We first investigate how the diffusion is influenced by membrane geometry. The membrane itself can have three-dimensional structure, which means that the actual path length of diffusion can be different from a projected path length. Here, we use a position Langevin equation for diffusion, which incorporates curvature and gradient effects of surfaces. Numeric simulation of the equation allows for the prediction of effective diffusion coefficients over corrugated surfaces.

In order to examine the distinct contributions of crowding and receptor-scaffold binding, we developed a computational model for AMPA-receptor diffusion in the synaptic and extrasynaptic space, which contains immobile obstacles, representing scaffolding, receptor and adhesion molecules in the PSD. The spatial distribution of scaffold proteins was determined directly from photo-activated localization microscopy measurements that mapped molecular positions with a resolution of ~20 nm. The AMPAR/scaffold association and dissociation rates were adjusted by computer simulations to fit single-particle tracking and fluorescence recovery after photobleaching measurements. The model predicts the recovery curves are influenced mostly by size changes while variation of kinetic rates did not significantly alter receptor residence time or mobility. We also examined the effect of binding, by adding a single synaptic binding motif to a small transmembrane protein, which slows its diffusion within the synapse. These results suggest that both protein size and binding play important roles in retaining surface-diffusing TM proteins within the excitatory synapse and shed light on the biophysical mechanisms that lead to high density of AMPARs at synapses.