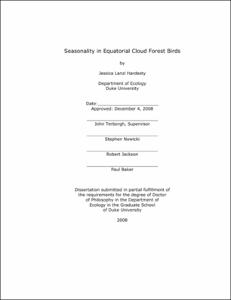 This thesis examines the dynamics of cloud forest bird communities along an altitudinal gradient on the eastern slopes of the Ecuadorian Andes. Specifically, I examined the seasonality of breeding, investigated a novel tool for documenting altitudinal migrations, and compared diets among groups of hummingbirds. In Chapter 2, I compared the prevalence of breeding condition in mist-netted birds among elevations and months. Overall, birds breed less seasonally at lower latitudes, but there is substantial variation in the timing of breeding, which varies with both abiotic conditions like precipitation (Hau 2004; Tye 1992), photoperiod (Hau et al. 1998) and temperature (Wikelski et al. 2000), and the biotic variation in plant phenology (Komdeur 1996), and insect abundance (Poulin et al. 1992). Several of these biotic (e.g. canopy height, biological diversity) and abiotic (e.g. temperature, pressure) factors vary along elevational gradients. I compared the percentage of birds captured in breeding condition along an altitudinal transect in eastern Ecuador, and found that breeding is more seasonal at higher altitudes. There was a marked increase in breeding birds during Sept-Nov at higher elevations, but I found no such "breeding season" at lower elevations.

I also examined a novel methodology for tracing annual altitudinal migrations which takes advantage of the natural variation in deuterium abundance from the base to the peaks of the Andes (Chapter 3). Local migrations by birds in the tropics pose conservation problems, in part because the movements themselves are difficult to document. There is a theoretical relationship between Deuterium (or 18O) signature and elevation, because of fractionation during precipitation events and evapotranspiration. A previous study had suggested that if a bird had more or less deuterium in its tissues than theory would suggest, such discrepancy might be used to identify altitudinal migrants. Unfortunately, when I refined the methodology, I found that the variation within species and sites was too great to allow such applications.

In Chapter 4 I shifted my focus to comparing diet among hummingbirds. Hummingbirds rely on the sugars in nectar to meet their high metabolic requirements, but most nectars are extremely low in nitrogen. As a result, the birds must also consume arthropods to meet their protein requirements. In many hummingbird species, males use nectar resources differently from females. I hypothesized that the different genders might also differ in their intake of arthropods, because females have higher nitrogen requirements for breeding. I used stable nitrogen isotopic analysis of feathers and blood to demonstrate that females feed at higher trophic levels than males and adults at higher levels than juveniles, respectively. Feathers from female Coeligena torquata (Collared Inca) showed significantly higher 15N levels (one-tailed t20=1.73, p<.05) than males. The difference between genders in Heliodoxa leadbeateri (Violet-fronted brilliant) was smaller (one-tailed t16=1.63, p=.06). δ15N was significantly lower for juveniles (mean = 6.34, SD = 2.10) than for adults (mean = 7.53, SD = 1.24). It appears that females captured during the breeding season were also feeding at higher trophic levels than those captured outside of the breeding season, although the sample sizes were small. Finally, I also found a slight but unanticipated effect of elevation on δ15N values in feathers.