"Would You Write Something in my Album?" Social Customs and their Literary Depiction in Nineteenth-Century France and Spain 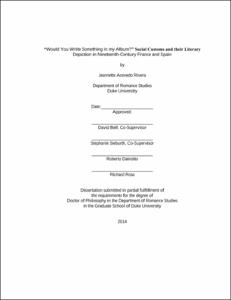 The album phenomenon developed in France and Spain and lasted throughout the entire nineteenth century. Albums were books with blank pages in which the owner collected contributions in the form of poetry, drawings, and music scores. These works were created for album owners by friends, acquaintances, and sometimes even suitors, and were meant to pay tribute to them. It is possible to imagine the album as a space of intense social and economic rivalry, in which owners of the books competed with one another to obtain the most luxurious books, and to fill them with the greatest number of entries from renowned artists. Similarly, contributors implicitly competed with one another to create the highest quality entries and contribute to albums that advanced their status as artists. However, established writers did not need further publicity, and many complained about the hassle of the constant request for contributions. To highlight the scope of the album phenomenon, and the frustration it caused writers and artists, José Zorrilla denounced album entry requests, stating that he had been solicited for album contributions a total of 188,000 times in his life. Honoré de Balzac condemned the album fashion even more fervently, declaring: "To hell with all albums."

I study the album as a practice that provides important information regarding gender, economic, and artistic exchanges in the milieus in which it flourished. My approach is based on the study of different types of texts. First, I analyze three essays on social customs that present the album from a perspective that mixes journalism and satire: Victor-Joseph Etienne de Jouy's 1811 essays "Des Album" and "Recherches sur l'Album et sur le chiffonier sentimental," and Mariano José de Larra's 1835 essay "El album." I use these essays to formulate a contextual theory on the album. I also examine nineteenth-century albums that I consulted in archives in France and Spain. Studying both the material construction of the albums and the contributions included in them, I try to understand the social and economic determinants of this social custom. Through the album entries, I explore the artistic networks established through, and exploited by, the album phenomenon, which were essential for successfully collecting contributions. Finally, I analyze fictional texts in which the album serves as a pivotal plot element used to shape the development of the stories and the roles of the protagonists. In my analysis of literary texts that portray the album, I focus on the establishment of gender and economic exchanges in this practice. I explore the imposition of traditional gender roles in the album phenomenon, according to which women were exclusively album owners and men were contributors. In my analysis of fictional texts, I also examine the economic aspect of this practice, reflecting upon the social class of the fictional characters involved in it. The literary texts that I study are: Honoré de Balzac's La Muse du département (1837), Manuel Bretón de los Herreros' El poeta y la beneficiada. Comedia en dos actos (1838) and El cuarto de hora. Comedia en cinco actos (1848), Juan de Ariza's "Historia de un album" (1847), Henri de Meilhac's L'autographe. Comédie en un acte (1858), Antonio Flores' "Cuadro cincuenta y uno. Placeres de sobremesa" (1863), José María de Pereda's Pedro Sánchez (1883), Juan López Valdemoro's "El álbum" (1886), and Leopoldo Alas `Clarín''s "Album-abanico" (1898).

The nineteenth century saw the rise of consumer culture and the proliferation of objects, such as cardholders, parasols, fans, pocket watches, and other trinkets. The album is at once part of this plethora of nineteenth-century objects and yet it is also distinct, in that it was a special piece of material culture that promoted a particular type of personal communication and required the creation of textual production. The album was established as a unique cultural manifestation, the study of which allows for a reconstruction of different types of social dynamics in its milieu.

Due to the complexity and richness of this object-centered practice, and the ways in which it developed, the album offers multiple analytical possibilities, as a social, historical, and literary phenomenon. One of the most significant contributions of this project lies in its transnational perspective and in its comparative analysis of different types of texts: essays on social customs, literary texts, and personal collections that survive in archival albums. The study of the exchanges that were fostered, and capitalized upon, through the album fashion is essential for understanding notions of private and public and collection as a practice. My analysis of the album yields invaluable insights into gender and class dynamics, ideas of art, and visual and material culture in nineteenth-century France and Spain.