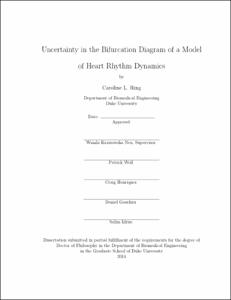 To understand the underlying mechanisms of cardiac arrhythmias, computational models are used to study heart rhythm dynamics. The parameters of these models carry inherent uncertainty. Therefore, to interpret the results of these models, uncertainty quantification (UQ) and sensitivity analysis (SA) are important. Polynomial chaos (PC) is a computationally efficient method for UQ and SA in which a model output Y, dependent on some independent uncertain parameters represented by a random vector &xi;, is approximated as a spectral expansion in multidimensional orthogonal polynomials in &xi;. The expansion can then be used to characterize the uncertainty in Y.

PC methods were applied to UQ and SA of the dynamics of a two-dimensional return-map model of cardiac action potential duration (APD) restitution in a paced single cell. Uncertainty was considered in four parameters of the model: three time constants and the pacing stimulus strength. The basic cycle length (BCL) (the period between stimuli) was treated as the control parameter. Model dynamics was characterized with bifurcation analysis, which determines the APD and stability of fixed points of the model at a range of BCLs, and the BCLs at which bifurcations occur. These quantities can be plotted in a bifurcation diagram, which summarizes the dynamics of the model. PC UQ and SA were performed for these quantities. UQ results were summarized in a novel probabilistic bifurcation diagram that visualizes the APD and stability of fixed points as uncertain quantities.

Classical PC methods assume that model outputs exist and reasonably smooth over the full domain of &xi;. Because models of heart rhythm often exhibit bifurcations and discontinuities, their outputs may not obey the existence and smoothness assumptions on the full domain, but only on some subdomains which may be irregularly shaped. On these subdomains, the random variables representing the parameters may no longer be independent. PC methods therefore must be modified for analysis of these discontinuous quantities. The Rosenblatt transformation maps the variables on the subdomain onto a rectangular domain; the transformed variables are independent and uniformly distributed. A new numerical estimation of the Rosenblatt transformation was developed that improves accuracy and computational efficiency compared to existing kernel density estimation methods. PC representations of the outputs in the transformed variables were then constructed. Coefficients of the PC expansions were estimated using Bayesian inference methods. For discontinuous model outputs, SA was performed using a sampling-based variance-reduction method, with the PC estimation used as an efficient proxy for the full model.

The computational time required for PC and Monte Carlo methods was also compared. PC analysis (including Rosenblatt transformation and Bayesian inference) required less than 10 total hours of computational time, of which approximately 30 minutes was devoted to model evaluations, compared to approximately 65 hours required for Monte Carlo sampling of the model outputs at 1 &times; 10<super>6</super> &xi; points.

PC methods provide a useful framework for efficient UQ and SA of the bifurcation diagram of a model of cardiac APD dynamics. Model outputs with bifurcations and discontinuities can be analyzed using modified PC methods. The methods applied and developed in this study may be extended to other models of heart rhythm dynamics. These methods have potential for use for uncertainty and sensitivity analysis in many applications of these models, including simulation studies of heart rate variability, cardiac pathologies, and interventions.