Military Service, Combat, and American Identity in the Progressive Era 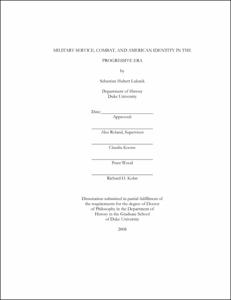 During the First World War, approximately two million troops served with the American Expeditionary Forces (AEF), the army that functioned as the material and symbolic focal point of America's commitment to the defeat of the Central Powers. This dissertation examines the impact of training, active service and combat on the social identity of the draftees and volunteers who comprised the AEF. Reigning historiography has generally minimized the importance of those experiences as factors in the formation of distinct socio-cultural allegiances among American participants of the Great War. Instead, it has stressed the historical context of Progressive-Era reforms as the key to understanding the development of corporate identity among American soldiers in the years 1917 - 1919. This body of scholarship maintains that soldiers interpreted the meaning of their war service, and evaluated their relationship with each other and with the mainstream of American civil society, through the prism of the Progressive rhetoric of social engineering, national rejuvenation, and moral "uplift" to which they had been exposed from the moment of their induction. Exposure to the optimistic slogans of Progressive reform, coupled with the brevity of America's active involvement in the conflict, assured that American soldiers would emerge from the war with a heightened appreciation of American socio-political institutions, culture, and moral norms. This dissertation offers an alternative interpretation of the impact of the Great War on the collective and individual identities of its American participants. Using letters, diaries, and memoirs penned by enlisted soldiers and junior officers, it asserts the primacy of the war experience in shaping the socio-cultural allegiances of ordinary "Doughboys." Immersion in the organizational milieu of the military, followed by overseas deployment, active service in France, and combat on the Western Front, represented a radical break with civilian forms of identity soldiers professed prior to the war. It was the sum of these life-changing experiences, rather than the Progressive indoctrination they received in the training camps, that shaped soldiers' views of their relationship with each other and to the nation back home. Under the influence of these experiences, soldiers became members of an alternative social order whose values and worldviews frequently clashed with the attitudes and norms they associated with the American home front. Convinced they belonged to a closed community whose unique experiences had set them apart from the American mainstream, Doughboys emerged from the war with a collective mentality that dwelled on the fundamental differences, rather than the similarities, between those who had fought "over there" from those who remained "over here."