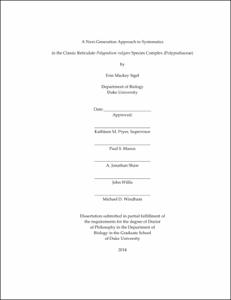 The <italic>Polypodium vulgare<italic> complex (Polypodiaceae) comprises a well-studied group of fern taxa whose members are cryptically differentiated morphologically and have generated a confusing and highly reticulate species cluster. Once considered a single species spanning much of northern Eurasia and North America, <italic>P. vulgare<italic> has been segregated into approximately 17 diploid and polyploid taxa as a result of cytotaxonomic work, hybridization experiments, and isozyme studies conducted during the 20th century. Despite considerable effort, however, the evolutionary relationships among the diploid members of the <italic>P. vulgare<italic> complex remain poorly resolved, and several taxa, particularly allopolyploids and their diploid progenitors, remain challenging to delineate morphologically due to a dearth of stable diagnostic characters. Furthermore, compared to many well-studied angiosperm reticulate complexes, relatively little is known about the number of independently-derived lineages, distribution, and evolutionary significance of the allopolyploid species that have formed recurrently. This dissertation is an attempt to advance systematic knowledge of the <italic>Polypodium vulgare<italic> complex and establish it as a "model" system for investigating the evolutionary consequences of allopolyploidy in ferns.

This dissertation concludes by demonstrating the utility of the allotetraploid <italic>Polypodium hesperium<italic> for understanding how ferns utilize the genetic diversity imparted by allopolyploidy and recurrent origins. Chapter IV details the use of high-throughput sequencing technologies to generate a reference transcriptome for <italic>Polypodium<italic>, a genus without preexisting genomic resources, and compare patterns of total and homoeolog-specific gene expression in leaf tissue of reciprocally formed lineages of <italic>P. hesperium<italic>. Genome-wide expression patterns of total gene expression and homoeolog expression ratios are strikingly similar between the lineages--total gene expression levels mirror those of the diploid progenitor P. amorphum and homoeologs derived from <italic>P. amorphum<italic> are preferentially expressed. The unprecedented levels of unbalanced expression level dominance and unbalanced homoeolog expression bias found in <italic>P. hesperium<italic> supports the hypothesis that these phenomena are pervasive consequences of allopolyploidy in plants.