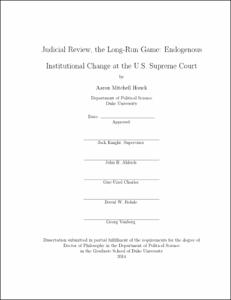 In this project, I examine why the judicial authority of the United States Supreme Court has increased. I propose a theoretical explanation of endogenous institutional change at the Court whereby the actions of the Court---specifically its decisions and the opinions in which it announces those decisions---have, over the long-run, altered the structures of the American separation-of-powers system. The Court has built up public support for the institution of judicial review to such a degree that its rulings are respected even when opposed by strong political actors---including the public. I evaluate this theory by analyzing three important transitional periods of Supreme Court history. The first case study explores the Court under Chief Justice John Marshall, and examines how the Court established judicial review as the most important means of constitutional interpretation. The second case study explores the Court's first cases interpreting the three Reconstruction Amendments, and shows that through these decisions the Court established itself as the arbiter of the meaning of these new amendments. The third case study looks at the Court's decision to hear reapportionment cases and its articulation of the political question doctrine that provided a legalistic method of expanding the political power of the Court. I conclude from these case studies that my theory provides a useful explanation for the expansion of judicial authority.